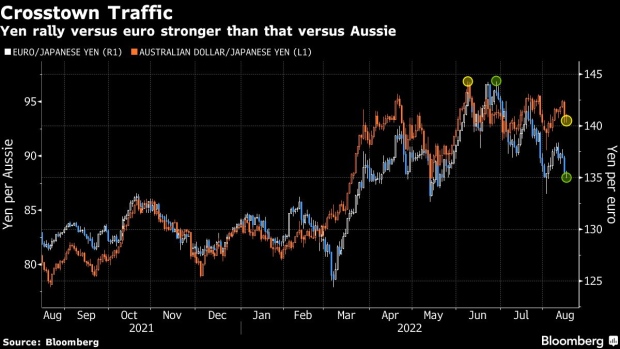 Japanese yen coins and banknotes on a tray arranged at a branch of Resona Bank Ltd. in Tokyo, Japan, on Tuesday, Aug. 9, 2022. Dollar-yen, which soared 38% from a March 2020 trough to mid-July this year, is in retreat. Photographer: Kiyoshi Ota/Bloomberg , Bloomberg

(Bloomberg) -- The yen may be tentatively rallying against the dollar but it is roaring ahead against other major peers in another sign the worst of this year’s losses may be behind it.

The Japanese currency has jumped almost 6% against the euro since its late June trough and about 4% against the pound from earlier that month. Since a trade-weighted yen gauge bottomed on June 21, it has risen against eight of its Group-of-10 peers and is little changed versus the other two.

The breadth of the yen’s strength is a sign its rebound may be more than just a reaction to the recent narrowing of the yield gap between the US and Japan -- a key driver of the currency that pushed it to a 24-year low against the dollar this year. It adds weight to the theory that betting against the yen -- one of the hottest macro trades of 2022 -- is a thing of the past and further gains lie ahead.

“Yen selling generally appears to be stalling,” said Yukio Ishizuki, a senior currency strategist at Daiwa Securities in Tokyo. “It’s still not the phase to completely turn to yen buying, but there seems to be a general consensus that it’s becoming difficult to stick to yen selling strategy of up until now just based on monetary policy.”

Three key pillars of the short-yen trade -- a widening US-Japan interest-rate gap, soaring oil prices and the loss of the currency’s haven status -- have been crumbling as growing fears about a global economic slowdown keep a lid on yields, pressure crude prices and boost demand for traditional safe assets.

The currency has climbed over 3% against the dollar to around the 134.40 level since the peak of the bearishness in mid-July, dulling the calls of those who argued that 140 and higher lay ahead. Leveraged investors have slashed their net-bearish yen wagers to the least since March 2021, recent data from the Commodity Futures Trading Commission showed.

Against the euro, the yen has fared even better, as investor concerns mount about the potential for recession with the region’s economy under threat from energy shortages and surging inflation. The same dynamic has helped drive the yen higher against other currencies sensitive to global economic growth.

“The euro is weighed by the negative economic outlook in the eurozone relative to the US while the resources-sensitive Aussie and the Canadian dollars are sold on a retreat in commodities due to slowdown concerns,” said Akira Moroga, manager of currency products at Aozora Bank in Tokyo. “Yen selling momentum is clearly weakening relative the peak phase and looks to be peaking out for now.”

Still, yen bulls confidence levels would be even more robust if the currency could rally more against the Australian dollar -- with the pair a key gauge of risk in the FX market. The yen is up just 1% since June 21 against the risk-sensitive Aussie.

“Australia’s 10-year yield appears to have halted its decline and China’s economy is unlikely to keep deteriorating so outlook for Aussie is relatively more sound,” said Masafumi Yamamoto, chief currency strategist at Mizuho Securities in Tokyo.