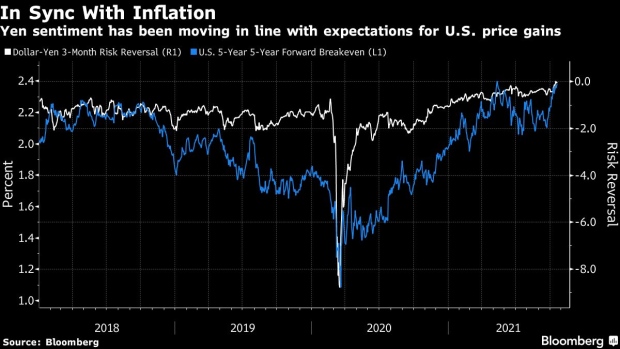 (Bloomberg) -- The yen appears to be at the mercy of American inflation expectations, which means the current selloff is likely to stall unless U.S. rates keep moving higher.

The ratio between three-month call and put options on the dollar-yen currency pair -- a so-called risk-reversal -- has been tracking closely a commonly used measure of market expectations for U.S. consumer price gains, the five-year five-year forward rate. And with inflation expectations surging, that dynamic has helped make the Japanese currency the worst performer this month among Group-of-10 peers.

The yen has weakened more than 2.5% against the greenback so far in October to around 114 per dollar, while most other major developed market counterparts have notched gains. And it’s down close to 10% for the whole of 2021. Meanwhile, solid economic growth in the U.S. coupled with supply chain difficulties and a commodities’ shortage has pushed inflation expectations to levels unseen since 2017. The upshot is that those expectations of price gains probably need to keep on rising from here for the yen move to maintain momentum.

More bearishness in the yen “would involve breakevens rising towards 3% and a new selloff in the bond market, which is now on hold,” according to Societe Generale strategists Kit Juckes and Olivier Korber. But with positioning on the currency potentially having peaked, the move in dollar-yen could falter if it fails to punch through 115 this week, they wrote in a note Tuesday.

Data from the Commodity Futures Trading Commission show that speculative bets against the yen have already increased in the past few weeks. While that may go further, it could also mean that traders might soon look to tap the brakes on the most recent move.

“Positioning in the yen is extremely bearish, and this increases the hurdle for selling momentum to continue,” said Viraj Patel, a strategist at Vanda Research. He says the dollar-yen rate could potentially pull back to around 112 or 113 and that the pair is likely to take a breather if Treasury yields and inflation expectations stabilize.