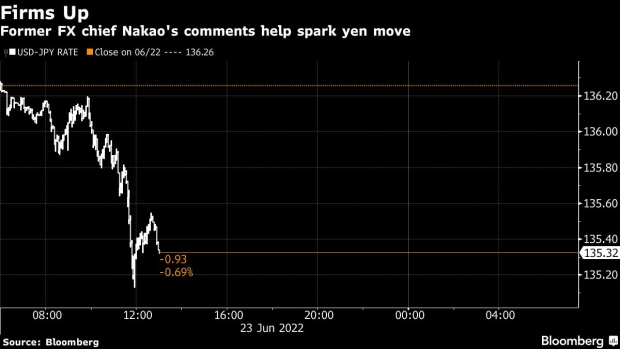 Japanese 10,000 yen banknotes are arranged for a photograph in Kawasaki, Kanagawa Prefecture, Japan, on Saturday, July 7, 2018. Japan’s currency rose against every single Group-of-10 peer in the first half, with an average 4.8 percent gain. Now a combination of U.S. protectionism, European populism and emerging market turmoil threatens to push the yen even higher in the second half, according to analysts. Photographer: Akio Kon/Bloomberg , Bloomberg

(Bloomberg) -- The possibility of Japan intervening directly in currency markets to stem the yen’s slide can’t be ruled out, according to Takehiko Nakao, former head of foreign exchange policy at the finance ministry, in remarks that appeared to spark a move in the currency.

“Unilateral intervention shouldn’t be eliminated as a possibility,” said Nakao, in an interview on Bloomberg TV, while flagging that the hurdle for gaining support from abroad was high.

“Coordinated intervention is generally very difficult unless there’s a very excessive movement in the market, or a kind of crisis mode,” he said.

While the Bank of Japan’s monetary policy was contributing to the weakness of the currency, some of the recent movement was also speculative, he said in separate comments. The weak yen was one of several negative aspects of the central bank’s efforts to cap yields, he added.

The yen strengthened to as much as 135.13 against the dollar from around 135.77 before his remarks. Nakao said he’s not in communication with current policy makers over possible intervention.

The comments come after Japan’s currency set a fresh 24-year low against the dollar on Wednesday as the diverging policy trajectories of the Federal Reserve and the BOJ continue to drive the currency down. The ebb and flow of speculation over Japan’s willingness to intervene to prop up the yen are among factors fueling heightened volatility in the market.

While gaining cooperation from the US to support the yen may be a tall order, Nakao said it’s still possible to step into markets without drawing outright opposition from Washington, citing interventions he orchestrated during his time at the finance ministry to halt the yen’s strength in 2011.

He said it’s not clear how much a small rebound in the yen would actually translate into costlier US imports given Japan’s goods make up a tiny portion of US inbound shipments. That suggests he sees the actual impact of currency intervention by Japan on the US economy as limited.

The BOJ’s ongoing monetary stimulus is clearly playing a role in the yen’s slide while its counterparts abroad tighten policy, according to Nakao, who also served as president of the Asian Development Bank and now works at Mizuho Research & Technologies.

“There are various negative elements coming out of the BOJ’s ongoing easing,” Nakao said. “One of them is a weaker yen.”

Other negatives include a loosening of the government’s fiscal discipline by keeping its borrowing costs very low, making it harder for financial institutions to eke out profits from a narrow gap between short-term and long-term interest rates, he said. That also interferes with market functionality, according to Nakao.

On top of that, an exit from the current easing program will be very difficult given the risk of sharp jumps in bond yields, he said.

The current yen’s slide is excessive both in terms of its level and its speed, and is not good for Japan’s economy because it exacerbates the high import costs of energy and food, according to the former forex chief. Some companies are suffering as they can’t pass on those rising costs to consumers, meaning they have to sacrifice their profitability and wages for workers, he added.

“It’s clearly wrong to say all is good when the yen is weak,” Nakao said. “Basically, there’s nothing good when your own nation’s currency depreciates,” since it lowers the value of Japan’s assets and companies in the eyes of overseas competitors, he said.

“The economy is not doing so well. Import-driven inflation is happening and the yen is weakening,” he said. “But when it comes to how to change things, all I can say is it’s going to be a difficult judgment.”

(Adds more comments from the interview)