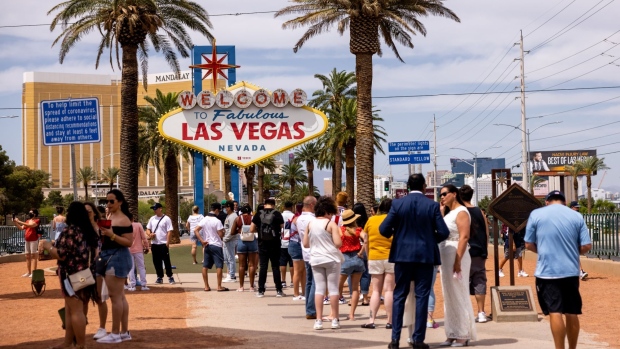 Tourists wait in line to take photographs with the "Welcome to Fabulous Las Vegas" sign in Las Vegas, Nevada, U.S., on Saturday, May 1, 2020. Anthony Fauci, the top infectious-disease official in the U.S., has said that vaccinating 70% to 85% of the U.S. population would enable a return to normalcy. Photographer: Roger Kisby/Bloomberg , Bloomberg

The endless nature of the pandemic combined with the lag in financial reporting by states and municipalities means that only now are we getting a complete picture of the destruction wrought by Covid-19 on bond issuers, and the results aren’t pretty. That doesn’t mean that Vegas is permanently broken, though.

That fiscal 2020 data contains eight months where the picture still looked bright, and then the shutdown, when business ground to a halt. “The first eight months of the fiscal year were strong for the Las Vegas Convention and Visitors Authority,” say the audited financials. “Through the month of March 2020, the LVCVA’s room tax collections were up 5.3% over the prior year, and the Las Vegas metropolitan area had a 4.0% unemployment rate.”

Then the shutdown came, and “no significant conventions were held in calendar year 2020 after March,” as it says in the documents. In January of 2021, the number of visitors to the city began to increase, and July marked the seventh month in a row the nation’s gambling capital gained in visitors. Only after that did the convention business revive, and even then, only fitfully. As it says in the documents, on Sept. 15, the National Association of Broadcasters canceled an event planned for this October.

But the pandemic is now entering past tense. Overall visitor volume in Vegas has been rising steeply this year and is nearing 2019 levels. Moody’s Investors Service rated the new bonds Aa3 with a stable outlook, saying the grade “reflects the authority’s entrenched position as the nation’s market leader for large-scale conventions and the area’s substantial tourism amenities throughout the Las Vegas area that will drive a strong return of hotel tax revenue post-pandemic within the next two years.”