The great work-from-home experiment occasioned by the pandemic has divided opinion in the corporate suite and sparked endless debates about whether employees work as effectively from the kitchen table as they do from the office.

A new study finds that, in fact, remote work does indeed make us more productive.

The work-from-home boom will lift productivity in the U.S. economy by 5 per cent, mostly because of savings in commuting time, the study says. The findings suggest the rapid adoption of new technology amid the pandemic will offer lasting economic gains, helping to boost sluggish productivity that has long weighed on global growth.

Not everyone is a fan of remote work. Goldman Sachs Group Inc. Chief Executive Officer David Solomon has called the new arrangements “an aberration” that the investment bank will “correct as quickly as possible,” arguing that it’s especially crucial for new recruits to absorb the Wall Street culture.

In contrast, Chief Executive Officer Mark Zuckerberg says the ability to hire engineers far from Facebook Inc.’s main offices has opened up new pools of talent, and many employees will continue working remotely after the pandemic -- at salaries more in line with their new locations.

The study polled more than 30,000 U.S. workers to gauge whether arrangements that began as a stopgap will endure once infections have subsided. The research found that 20 per cent of full workdays will be from home after the pandemic, compared with just 5 per cent before -- but far less than at the height of the crisis.

The experience has aggravated economic and racial fault lines in the U.S., given that many lower-paying jobs -- in food preparation and other essential industries -- can’t be done remotely, potentially placing those workers at greater risk of COVID infection.

The benefits of working from home “will accrue disproportionately to the highly educated and well paid,” the study noted. 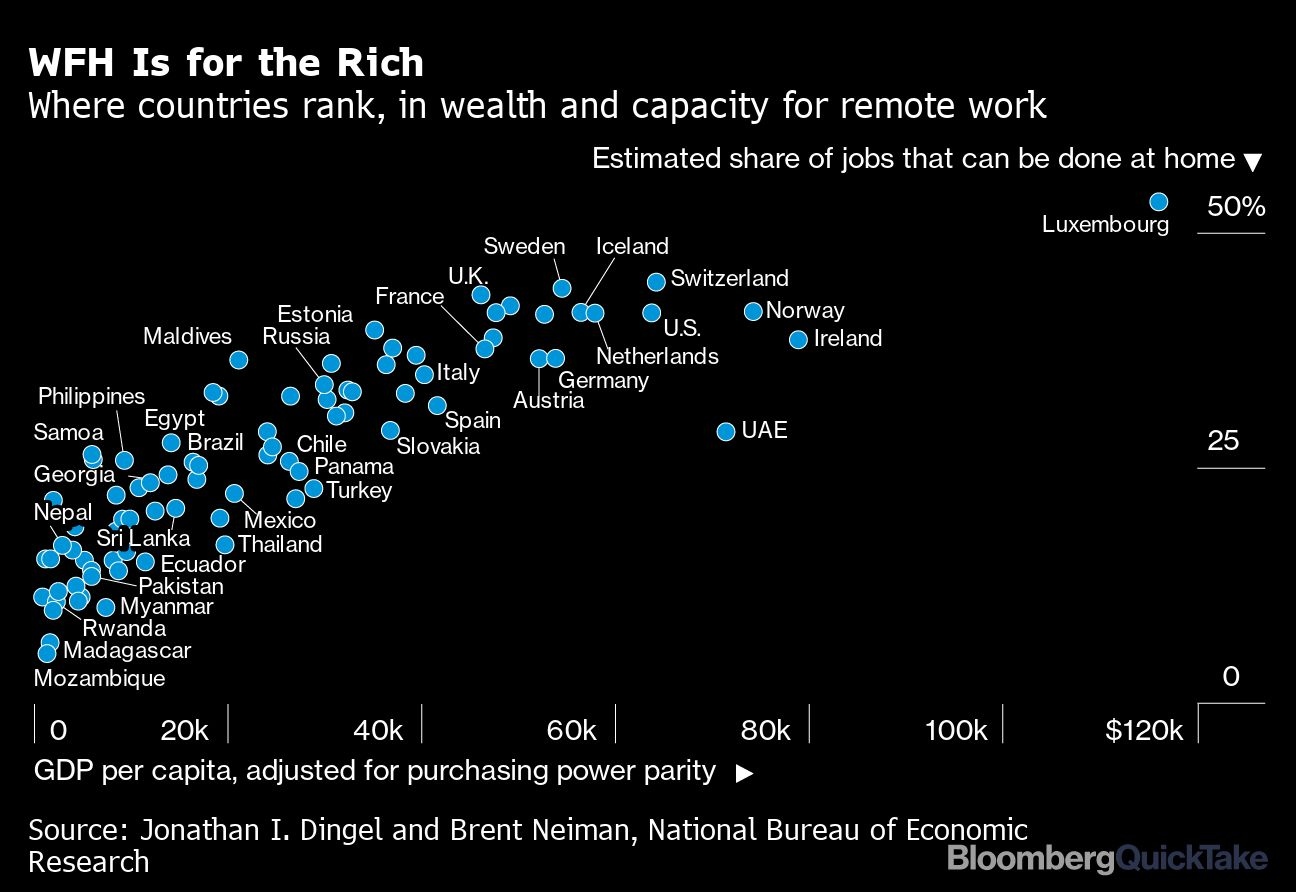 Remote work once might have been a career killer: A U.K. government study of the years before the pandemic found that people who worked from home were far less likely to be promoted. But COVID has reduced the stigma that comes with working from home, the study found.

A better-than-expected experience, technological innovations and investments, and lingering fears of crowds and contagion will all bolster the new working arrangements, according to the research. A separate study last month showed than more than one in five company executives expected a reduction in office space in the coming year, reflecting a shift toward more virtual and remote operations even after employees have returned to the office.

The paper was co-authored by Jose Maria Barrero of the Instituto Tecnológico Autónomo de México, Nicholas Bloom of Stanford University and Steven J. Davis of the University of Chicago Booth School of Business and Hoover Institution.

“Our data on employer plans and the relative productivity of WFH imply a 5 per cent productivity boost in the post-pandemic economy due to re-optimized working arrangements,” according to the paper. “Only one-fifth of this productivity gain will show up in conventional productivity measures, because they do not capture the time savings from less commuting.”

Other main findings include:

“The shift to WFH will also have highly uneven geographic effects, diminishing the fortunes of cities like San Francisco with high rates of inward commuting,” the study found.

--With assistance from Alex Tanzi.