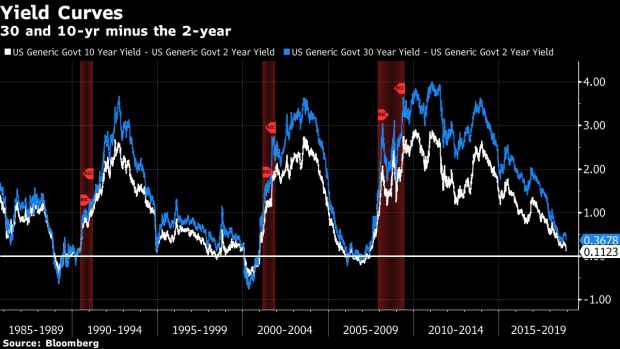 (Bloomberg) -- America’s economy is kicking by almost every metric the Federal Reserve cares about, with strong growth, at-target inflation and super-low unemployment. Yet the world seems risky right now, and the threat of a yield-curve inversion is among the dangers central bankers are monitoring.

“In terms of reading the tea leaves around financial markets, obviously it’s something we pay a lot of attention to,” New York Fed President John Williams said at a press conference Tuesday.

An inversion happens when interest rates on shorter-maturity government securities climb above those of longer-dated bonds. That doesn’t usually happen, because investors want to earn more if they’re tying up their money for longer. When it does, it’s bad news and recession has historically followed.

The yield curve -- the range of interest rates for bonds with different maturities -- is flattening again. The spread between 2-year and 10-year Treasury yields has been shrinking and is now at 11.5 basis points, its lowest since 2007 -- not exactly an auspicious historical comparison.

Fed officials are reacting with varying degrees of alarm. Dallas Fed President Robert Kaplan told Reuters Monday that the yield curve is telling him “that it’s wise to be patient here” and suggests markets expect slow global growth. But when asked about the recent flattening on Tuesday, Williams lumped the yield curve in with other risks, including global ones.

While he and his colleagues pay attention to warning signs from financial markets, he said financial conditions are still “overall pretty favorable” to growth.

“There are risks on the horizon that we need to be very attentive to,” he said. “We are watching for signs that the economy is slowing more than we thought, or quite honestly, on the other side, signs that economic strength -- positive surprises that we saw this year -- continue into next year.”

To contact the editors responsible for this story: Brendan Murray at brmurray@bloomberg.net, Alister Bull, Randall Woods