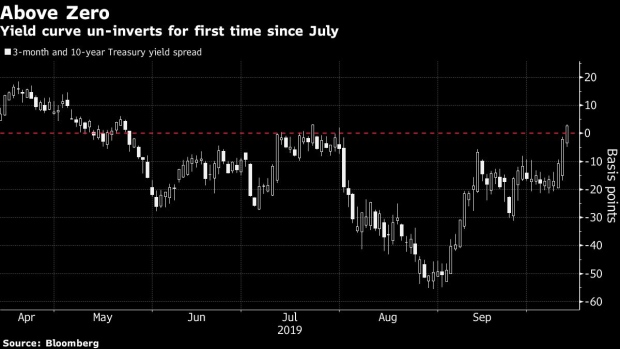 (Bloomberg) -- A closely watched section of the Treasuries yield curve returned to positive territory for the first time in months as optimism over U.S.-China trade negotiations and the possibility of a Brexit deal weighed on havens.

Treasuries extended their sell-off to a third day, pushing the 10-year yield above the rate on three-month bills for the first time since July. The spread inverted in March for the first time in a decade, in what’s considered a harbinger of a U.S. recession in the coming 18 months.

The U.S. and China have signaled cautious optimism over trade negotiations that began Thursday in Washington, propelling yields higher as odds of a partial deal rose. Signs of progress in Brexit talks have also emerged, compounding the risk-on tone, with the European Union recommending that detailed talks begin. With the clouds hanging over the global economy appearing to lift, traders are starting to trim bets on further easing by the Federal Reserve, according to Principal Global Investors.

“A Brexit deal should lift growth prospects for Europe,” Seema Shah, Principal’s chief strategist, said via email. “U.S. recession risk has primarily been driven by weakness associated with the U.S.-China trade war, so good news in that arena should lower recession risk, and therefore need for Fed cuts.”

Benchmark 10-year yields rose as high as 1.72%, leaving them almost 20 basis points higher this week. Meanwhile, rates on three-month bills stalled at about 1.68%. This portion of the yield curve, which inverted by as much as 56 basis points in August, is now positive again, and was last at about 3 basis points.

The haven sell-off bled into other asset classes, with the yen and the Swiss franc leading Group-of-10 currency losses. Gold tumbled, while stocks climbed.

Fed fund futures show that traders are pricing in around 28 basis points of additional easing by year-end, compared with 35 basis points earlier this week. While the prospects of a trade agreement and a Brexit deal are trimming rate-cut expectations, there’s a risk that the moves reverse, according to TD Securities.

“I do think the markets may be getting ahead of themselves, however, as we have seen whipsaw price action before,” TD senior rates strategist Gennadiy Goldberg said.

--With assistance from Elizabeth Stanton.