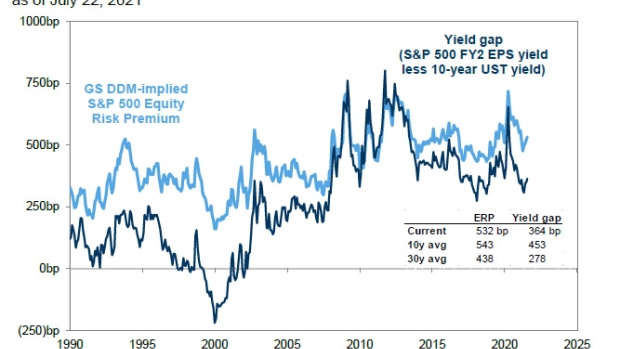 (Bloomberg) -- The longer bond yields stay stuck, the jumpier the stock market seems to get. Heading into a historically volatile month, that’s the heart of the dilemma facing equity investors as they try to balance divergent signals on valuations and growth.

On one side is the claim that very low interest rates make stocks worth more by boosting the value of future profits. Against that is an equally plausible view that falling yields denote pessimism about the economy that make stocks less valuable in anticipation of sluggish growth. It’s resolving, for now, in a kind of herky-jerky turbulence, such as this week’s, when despite rising on three of five days the Nasdaq 100 Index ended down 1%.

The problem for investors is that action in bonds is among the most persuasive valuation case for equities -- in both directions. Goldman Sachs Group said this week that with yields as low as they are now -- or even with them rising modestly -- models including a dividend-discount analysis imply the S&P 500 Index could rise another 6% by year-end.

At the same time the fixed-income market’s picture of weakening demand for money is a time-honored bear case on the economy that provokes no end of pessimism among Wall Street’s old guard.

Goldman strategists led by David Kostin are among those who consider the 10-year Treasury yield -- 1.23% at last check -- a key plank in a bull case for stocks. His argument focuses on the earnings yield paid by the S&P 500, or annual profits divided by the index’s price. Right now it’s roughly 360 basis points higher than the 10-year bond rate. That’s above the three-decade average of 278 basis points and about 20 points wider than it was two months ago, the strategists wrote in a note this week.

The comparison is often employed by bulls against criticism valuations are too high. It informs a concept known as TINA -- short for “there is no alternative” to stocks. A similar point has been made by the Federal Reserve’s chair Jerome Powell, who lobbed it against arguments the central bank was helping to create an asset bubble.

To be sure, this is a stock market that can use a strong justification for high valuations. The Nasdaq 100 ended the week trading above 36 times earnings, a multiple that exceeds virtually any outside of the dot-com bubble. Bulls have long explained the situation by citing the potential for earnings growth in the recovering economy. That’s where rock-bottom bond yields start to be less supportive of the equity market.

“When interest rates start to fall, people start to worry about are valuations going to get worse?” Matt Maley, chief market strategist for Miller Tabak + Co., said by phone. “In other words, if it’s signaling that the economy’s going to slow -- whether they’re worried about the variants or just a natural slowdown -- what does that mean? It means the earnings growth we’re seeing right now, which is fabulous, is not going to be maintained.”

The tug-of-war between signals -- yields both fueling and calling into question the altitude of stock prices, makes valuing the stock market particularly difficult right now. To some extent it explains its recent jumpiness. The Nasdaq was down 1% in two separate sessions this week, a demonstration of volatility that had been rare in preceding months.

Stubbornly lower Treasury yields have befuddled investors, many of whom saw inflationary pressures as grounds for yields to rise. But that’s at least one reason declines in the market have been quick and shallow, according to Zhiwei Ren, portfolio manager at Penn Mutual Asset Management.

“When you put the stock market side by side with the money market, which is zero, or the bond market, which yields about 1.2% for 10-year Treasuries, then basically that’s the only game in town,” Ren said by phone. “So people with capital, with savings, they don’t have much choice. They have to put money in the stock market.”

That’s exactly what keeps happening -- with almost every decline, investors rush in to buy the dip. The day-trader squadron plowed almost $1.7 billion into the market on Tuesday, a day roiled by news out of China. And last week, day traders snapped up stocks at the fastest clip on record, pouring around $2.2 billion into equities at the start of the week. The S&P 500 has now gone 185 days without a pullback of at least 5%, according to Bespoke Investment Group, pushing the index to a record on 41 occasions this year.

Scooping up stocks during declines “has become a Pavlovian response,” wrote Steve Sosnick, chief strategist at Interactive Brokers. “This is a learned reflex that has worked spectacularly well for past decade and certainly the last year and a half for both investors and traders, large and small. There is, of course, a risk to operating reflexively in a field that demands intellect, but the rewards are far outweighing the risks -- at least for now.”