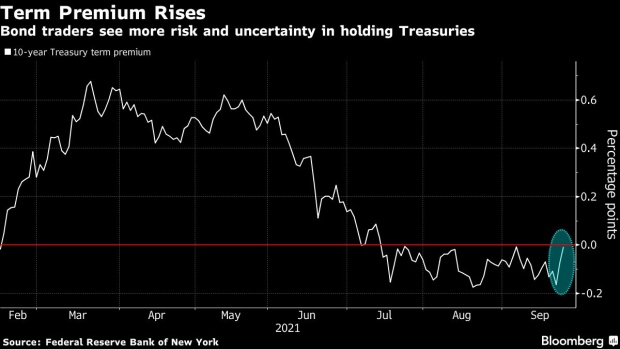 (Bloomberg) -- There’s a lot of theories circulating on why Treasury yields have seemingly begun to become unmoored. In the end, it boils down to investors starting to demand a premium again for the risk of parking their cash with the U.S. government.

A double whammy of hawkish surprises from the Federal Reserve and the Bank of England last week has surely played a role in driving 10-year Treasury yields to their highest since June, and shorter tenors even higher. So has a rise in oil prices, and energy costs more broadly. Yet investors hate uncertainty more than anything, and a lack of clarity over the path of central bank policy or if inflation will prove transitory has been picking up.

The 10-year Treasury term premium -- or most simply the extra compensation investors require to own the maturity rather than rolling over a shorter-dated obligation -- jumped over 15 basis points last week, according to a Federal Reserve Bank of New York model. It’s nearly cracked above the zero line, after hovering below it since mid July.

“Term premium has been the story,” said Richard McGuire, head of rates strategy at Rabobank International. “This perceived hawkish shift from central banks is raising uncertainty, begging the question if they are sticking to their narrative and still willing to look through inflation given they have said they view it as transitory. There’s also rising investor uncertainty about the inflation outlook amid the rise in energy prices.”

Last year the Fed moved to a new policy framework whereas instead of regarding its 2% inflation target as a hard ceiling it will to allow price pressures to run hot for a while during a recovery to average 2% inflation over time. Most had deemed that as sign the Fed will be slower to lift rates in the upcoming cycle, yet McGuire says the central bank signaling about seven quarter-point rate increases by end end of 2024 puts that policy in question.

Of course, since it’s not directly observable, term premium has always been a somewhat nebulous bond-market metric but is broadly agreed upon as a catch all residual that helps explain the level of long-term yields. According to former Fed Chairman Ben S. Bernanke, the size of the buffer investors demand reflects things such as the risk of the the unexpected -- that includes on inflation.

McGuire pointed out also that when 10-year yields had surged in March to 1.77%, the term premium moved to its highest since 2015 -- at well over half a percentage point.