US stocks tumbled the most in three weeks and Treasury yields spiked higher after an unexpectedly hot reading in consumer prices fueled bets the Federal Reserve will have to step up its battle against inflation.

The S&P 500 fell 2.9 per cent, closing out the second worst week this year and the ninth weekly drop in the past 10, as fears mounted that efforts to combat inflation risk stifling growth. Tech shares bore the brunt of Friday’s rout, with the Nasdaq 100 tumbling more than three per cent. Growth stocks from Cathie Wood’s flagship ETF to software developers and chipmakers plunged. A separate report showed US consumer sentiment dropped in early June to a record, adding to pressure on shares of airlines, casinos and hotels.

In the Treasury market, two-year yields topped three per cent, a level not seen since 2008, while the move in short rates left 30-year yields below those on five-year notes, signaling the risk that tightening will slow growth. Bitcoin slid back below US$30,000, the Cboe Volatility Index surged to 29 and the dollar advanced.

Rates traders ramped up bets on Fed hikes, with three half-point increases now likely over the June, July and September policy meetings, according to market-derived prices. The central bank has signaled it will likely raise rates by 50 basis points when it meets next week. 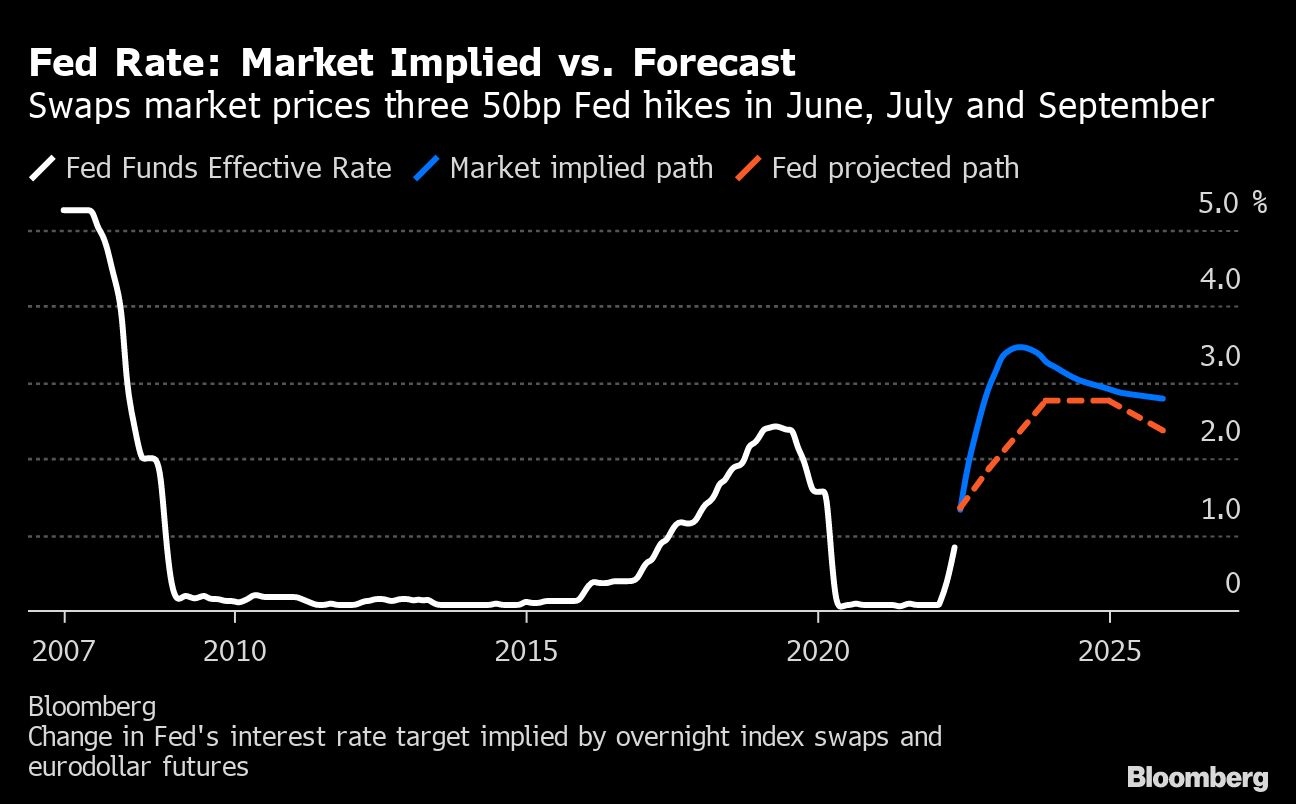 The consumer price index rose one per cent from a month earlier and 8.6 per cent on the year, topping all estimates. Shelter, food and gas were the largest contributors. The so-called core CPI, which strips out the more volatile food and energy components, rose 0.6 per cent from the prior month and six per cent from a year ago, also above forecasts.

“It is straightforward bad,” Dennis DeBusschere, the founder of 22V Research, said. “Flat month-over-month on core means more financial conditions tightening. Powell should sound pretty hawkish next week given the tight labor market and core CPI that didn’t fall month-over-month. The reaction in the front end was massive relative to long end.”

Separately, the University of Michigan’s preliminary June sentiment index fell to 50.2 from 58.4 in May, data released Friday showed. The figure was weaker than all estimates in a Bloomberg survey of economists which had a median forecast of 58.1.

Wall Street weighs in on inflation, rates and stocks