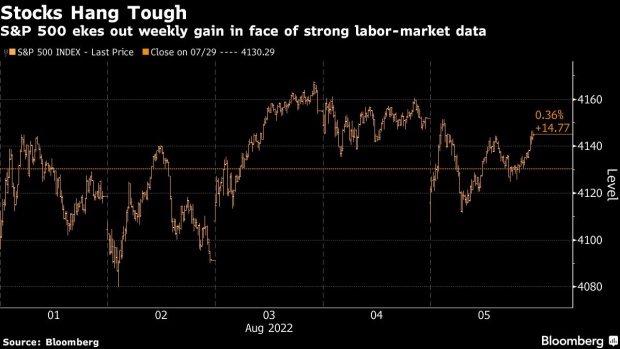 (Bloomberg) -- Never ones for nuance, equity traders have apparently gotten bored waiting for higher interest rates to make their presence known in the economy.

How else to explain the last few weeks in markets, a period in which increasingly thorny warnings from the Federal Reserve have done nothing to limit the spirit of bulls bent on celebrating buoyant earnings and economic reports? While the S&P 500’s performance over the last five days was virtually flat compared with the previous two weeks, neither did the market give those gains back -- a notable achievement given Friday’s roaring jobs report that stoked bets on faster tightening.

Even before that, the message from a wave of officials was clear. The central bank is “nowhere near” being almost done cracking down on inflation, San Francisco’s Mary Daly said. Cleveland’s Loretta Mester is looking for persuasive evidence price pressures are moderating and Chicago’s Charles Evans said policy makers were a few reports away from seeing the kind of data that would make them think they’re on the right track. Treasury investors took the hint, sending yields spiking higher, but the S&P 500, with a 0.4% advance, eked out its third straight weekly gain, while the Nasdaq 100 added 2%.

“The market is basically saying to the Fed, ‘You’re not going to have to go as far as you think you do,’ and also, ‘You might have to start reversing course much sooner than you think you have to,’” Katie Nixon, chief investment officer at Northern Trust Wealth Management, said in an interview with Bloomberg Radio. “Is it sustainable in the face of a Fed that appears to be hell-bent on not stopping not stopping?”

All week, investors looked at various releases that pointed to a still-strong economy and plateauing inflation readings, and took them to mean the Fed might be able to tame inflation without crushing the economy. Corporate earnings results have been strong, and analyst estimates suggest profits from S&P 500 can grow in the second half, as well. Data out Friday showed US employers added more jobs in July than estimated and the unemployment rate dropped to a five-decade low of 3.5%.

That report brought signs of strong wage growth, but Northern Trust’s Nixon says the leveling off of some other inflation data is what’s giving investors confidence to fight the Fed. She cites commodities prices, including a drop in oil -- where West Texas Intermediate this week fell below $90 a barrel for the first time since Russia invaded Ukraine -- as well as data released by the Institute for Supply Management that showed sharp declines in measures of prices paid by both service providers and manufacturers in July.

“So you’re seeing this broadly based plateauing, if not falling, in the inflation data,” she said.

The bond market took a different signal from the data, one that says the economy and labor market are strong enough that the Fed will need to administer more and bigger rate increases -- sooner rather than later. Yields on 2-year Treasuries surged by more than 20 basis points on Friday alone. Swap contracts now show that another three-quarter percent hike is likelier than half at the Fed’s meeting in September.

Finding bears to throw cold water on the stock market’s rebound from its June lows isn’t hard, though. One big argument holds that even though recent data show a still-robust economy, central-bank policy takes time to work.

The jobs data is lagging, which shows the economy likely isn’t in a recession right now, “but it doesn’t mean that we’re not going to slow down,” Keith Lerner, co-chief investment officer at Truist Advisory Services, said by phone. “It’s going to take time for all this tightening to work its way in. We think the risk-reward, from a market standpoint, is less favorable.”