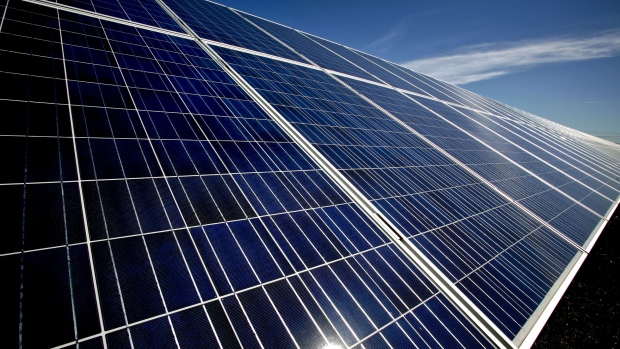 (Bloomberg) -- Over the past decade, a boom in renewable energy made rooftop solar increasingly practical for US homeowners — but it largely left out the 44 million households that rent, and those unable to afford to go green. The Inflation Reduction Act is now poised to change that dynamic, expanding access to low-cost, carbon-free solar energy by providing generous incentives for what’s known as community solar.

Developers of these smaller-scale projects install solar panels on vacant land in or near communities, or on the rooftops of commercial buildings. Renters, apartment dwellers and people whose homes are not suitable for rooftop arrays can then subscribe to a community “solar garden,” paying a monthly fee based on their electricity consumption. In exchange, they receive a discount on their utility bills for the clean power they’re helping supply to the grid.

Twenty-one states and the District of Columbia allow community solar projects, and the IRA makes it both easier and cheaper to develop more of them. The law provides $7 billion to states to enable low-income and disadvantaged communities to benefit from zero-emission technologies, money that could be used to establish community solar programs (at least through September 2024). It also offers a tax credit of up to 50% for building solar systems that serve low-income communities and generate up to 5 megawatts of electricity, plus a 30% tax credit for batteries installed to store solar energy. Community solar projects typically generate between 250 kilowatts and 5 megawatts of electricity, which can power around 40 to 800 homes.

“I think the IRA is going to unlock a whole lot of new opportunity for Americans who historically have had barriers to accessing clean energy,” says Susannah Churchill, a deputy program director at Vote Solar, an Oakland, California-based nonprofit that advocates for state renewable energy policies. In addition to the IRA’s federal incentives, California this month enacted a community solar program designed to benefit low-income neighborhoods.

The impacts of these programs could be wide-ranging, according to renewable energy experts. Americans with access to solar energy can slash their utility bills, and power electric cars and other appliances with emissions-free power. Ramping up solar in urban and suburban areas would also reduce pressure to build large solar power plants on environmentally sensitive lands, a practice that has triggered lengthy legal battles between conservationists and developers. And while a significant expansion of community solar would likely require utility-infrastructure upgrades, it would also reduce the need for new multibillion-dollar transmission lines to bring electricity from distant solar plants to cities. Throw in battery storage, and community solar could help utilities avoid climate-driven blackouts and the need to fire up fossil-fuel plants to meet nighttime demand.

“It's a win-win-win across the board for environmental justice, faster development and resilience because of where these projects are sited,” says Kiran Bhatraju, chief executive officer of Arcadia, a Washington, D.C.-based startup that operates a software platform to sign up and manage community solar subscribers. “The beauty of community solar is that literally anyone who pays a power bill can join the clean energy revolution and start saving money.”

That’s exactly what nonprofit worker Addie Arnold did last year when renting an apartment in Minneapolis. Arnold found a community solar garden through a search service offered by Solar United Neighbors, a solar advocacy group. She says it saves her about 10% on her utility bill, and when she later bought a townhouse — installing solar panels wasn’t an option there, either — Arnold was able to transfer her subscription to her new home.

“You get to save money and you're helping out the solar developers and helping to support clean energy,” she says. “More people should look into signing up.”

Community solar developers, however, tend to face significant solar startup costs. One key provision of the Inflation Reduction Act allows developers to include fees for connecting community solar projects to the grid in the costs eligible for tax credits. Those interconnection fees can account for a quarter of a solar project’s price tag, says Jeff Cramer, chief executive officer of the Coalition for Community Solar Access, an alliance of businesses and nonprofits.

“You're setting up a market that is rewarding projects that rectify these injustices in the electricity system and is encouraging investors to serve those customers most in need of bill savings and access to clean energy,” Cramer says.

“There's always a subset of projects that are not economical now and that we put on the backburner,” he says. “The IRA makes them work, so we’ll move forward much more rapidly.”

Sachu Constantine, executive director of Vote Solar, says that requirement aligns with the IRA’s incentives, and encourages community solar developers to go big. The sun-soaked Inland Empire region of Southern California, for instance, is home to scores of gargantuan warehouses that are often located in low-income communities. “There is a significant amount of solar that you can put there as well on big box stores and malls,” he says.

The IRA also allows nonprofit organizations to take the renewable energy tax credit as a cash payment, which Constantine says could spur some to start their own community solar projects.

Even homeowners stand to benefit from a community-solar expansion. Business consultant Jeff Haanen, who lives in a 1950s ranch home in Littleton, Colorado, with his wife and four daughters, has long wanted to go solar but didn’t want to put panels on his roof. “I knew I didn't like the aesthetics of it, but I did like solar energy,” he says.

So Haanen subscribed to a 2-megawatt community solar project operated by Pivot Energy about 140 miles from his home. “Honestly, I didn't know where my energy was coming from before – if it was natural gas or hydro or coal or whatever,” he says. “But now I can see it's coming from the solar farm in Sterling, Colorado. It's kind of fun to be a little more connected to my community.”