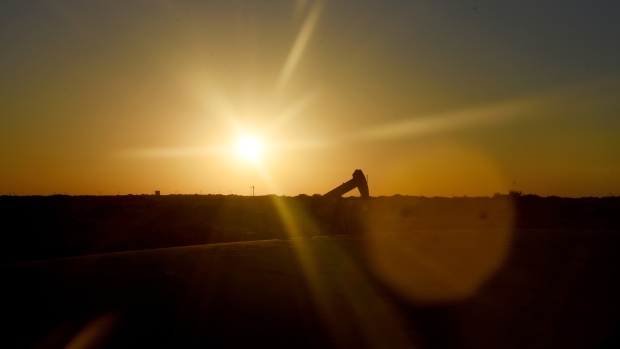 The sun sets behind an oil rig seen from Monahans Sandhills State Park in Monahans, Texas, U.S., on Tuesday, June 19, 2018. In the West Texas plains, frack-sand mines suddenly seem to be popping up everywhere. Twelve months ago, none of them existed - together, these mines will ship some 22 million tons of sand this year to shale drillers in the Permian Basin, the hottest oil patch on Earth. , Bloomberg

The Toronto Stock Exchange’s winning streak may have been snapped this week, but the Canadian benchmark index’s strong start to 2019 has many analysts and portfolio managers on the lookout for buying opportunities.

Last Friday, Portfolio Management Corp. managing director Norman Levine told BNN Bloomberg that he had his sights set on the energy sector because “things can’t get worse than they are.”

Canadian crude plunged to a US$50 discount against West Texas Intermediate last October and Canadian stocks took a beating in December, but the TSX energy index is up more than eight per cent since the start of the year.

So, are other analysts and portfolio managers ready to follow suit?

Here’s a round-up of what some of them had to say this week on BNN Bloomberg:

“There are a few positives on the horizon. We know OPEC is going to be cutting production … Plus, we have Alberta that’s cutting production. So, we can see a modest uptick in the price for crude - both Western Canadian Select and WTI – at a time when the energy sector itself is trading at very low levels for price-to-earnings and price-to-book, near the lowest that we’ve seen in 15 years.”

Philip Petursson, chief investment strategist at Manulife Investments, explains why he sees the TSX outperforming U.S. markets this year, and why Canadian energy and financials are attractive.

“We’ve seen the resource industries rather depressed over the last few years but none moreso than within the energy sector, which has absolutely collapsed over the last couple of years in terms of pricing and so on... We’re seeing many of these companies selling at fractions of [the] prices of what they used to sell at. And we see some of the strong companies with positive cash flow, better balance sheets in an excellent position to take over a number of these weaker players within the industry.”

Michael Sprung, President at Sprung Investment Management, discusses why the Canadian energy sector is ripe for M&A activity this year.

“You only need a little good news on the pipeline [front]… You need something like that to engender a little more enthusiasm over Canadian oil and to see, in particular, some more enthusiasm from the Canadian equity names around some progress there. The situation can’t continue indefinitely. It needs some resolution soon, and I’d suggest we’re probably about to see that sometime shortly.”

Watch for a resource-led market recovery in Canada: Global strategist

The winning streak on Bay Street is now 12 trading days long and Robert Jukes, global strategist at Canaccord Genuity in London, believes the stage could be set for a strong year in Canadian stocks. He explains why resource stocks are likely to lead the way.

"The problem is, you can only sell your product for what the market’s willing to pay for it. As we all know, the oil sands product in Alberta is selling at a huge discount to other oil. There’s basically a lot of other oil floating around in the world that’s easier to get to refineries right now than heavy crude from Alberta. So: Price-taker, price-taker, price-taker. There’s nothing at all that they can do to change the price of oil. And we don’t own any – any – energy producers in Canada… we’re zero-weighted on the sector."

David Baskin of Baskin Wealth gives his outlook for shares of Canadian Natural.

“There are projects on the horizon for both oil and gas. We need to get them built. There’s probably more regulatory risk to these oil pipeline expansions in terms of timelines and whatnot, but it is certainly an overhang. International investors, I think they’re still watching but they haven’t come back en masse.”

Michael Dunn, director institutional research at GMP FirstEnergy, joins BNN Bloomberg to provide perspective on investing in the Canadian energy sector. Editor’s note: This interview was updated on Jan. 24, 2019 to include disclosures of stocks discussed by Michael Dunn.

“Our views on the energy sector are really predicated on the belief that the Canadian population will come to an understanding as to the contribution of energy to the broader economy, the contribution of energy and oil to their well-being… We think there’s a number of catalysts over 2019 that will allow those views to percolate and might allow sentiment to improve toward the energy sector.”

David Doyle, North American economist and Canadian market strategist at Macquarie Group, says the Canadian economy is at a "critical juncture" and a "prolonged period of weak growth may be the best we can hope for."

“I think it’s not over yet. I think there might be one more pullback in energy during the first quarter because I think the correction in the U.S. market isn’t over. … So, there may be one more great buying opportunity. I don’t know if we’re going to see bargains as low as we saw on Dec. 24, but any time you see much cheaper prices than today, I’m a buyer. I’m not saying defence, I’m saying hold some cash, because you're going to get great buying opportunities again.”