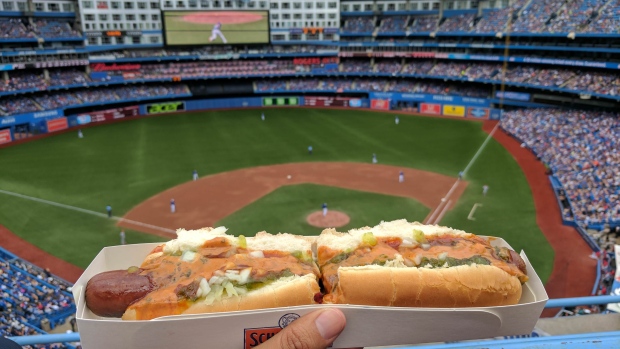 A spectator holds up a hot dog at a Blue Jays game in Toronto , Reddit/Scruntyscrunt

The next time you're chowing down on a hot dog at a Blue Jays game, take note of what it cost you.

At $6 each, the Toronto Blue Jays’ hot dogs are neither the most expensive nor the cheapest in Major League Baseball — those honours go to the New York Mets at US$6.50 (or about $8.37 Canadian) and the Baltimore Orioles at US$1.50 (about $1.94 Canadian), respectively.

Still, like many other baseball stadiums across North America, Toronto’s Rogers Centre is cashing in on fans buying into the longstanding tradition of pairing baseball with wieners and sausages which, along with pizza slices, are the stadium’s best-selling concessions, according to a Blue Jays spokesperson.

BNN Sidelines: José Bautista sets his sights on his next business ventures

In this edition of BNN Sidelines, host Jon Erlichman joins José Bautista Major League Baseball All Star, for a look at what drove his successful stint with the Toronto Blue Jays, why he's teamed up with Hublot to design a watch and why he's constantly ready for his next move.

While the spokesperson would not disclose the wholesale price of the Schneiders hot dogs served at the Rogers Centre, the ballpark staple can usually be found cheaper from street vendors just outside the stadium at about $2.50 a dog.

Toronto’s Soloway’s Hotdog Factory Outlet, which supplies street vendors in the city, charges $17.95 per case of 32 weiners, or approximately 56 cents each. Buns cost $2.85 per dozen, or 24 cents each. That brings the total wholesale price of one hot dog supplied by Soloway’s to about 80 cents (minus the condiments).

It's likely the Jays are scoring a better deal than Toronto street vendors, said Sylvain Charlebois, dean and professor at Dalhousie University’s Faculty of Management, whose research focuses on food distribution and policy.

“The Rogers Centre probably buys way more. When you sell hot dogs to different vendors, the distribution costs are much higher, whereas Rogers Centre is only one address, so I suspect that prices may be even lower,” Charlebois said.

“Now, of course, you have to pay labour and all the people trying to sell these products in stands and kiosks, but overall they actually do make a lot of money,” he added. 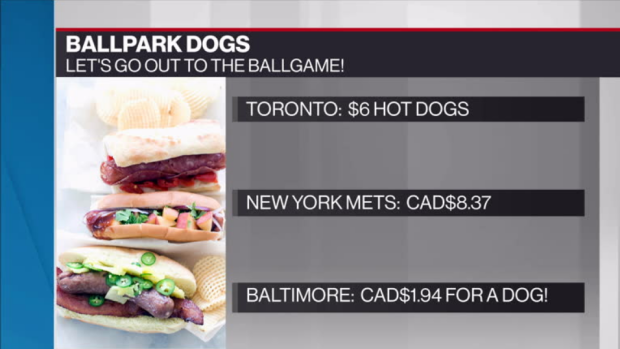 In addition to being notorious for their marked-up prices, hot dogs have a reputation for consisting of dubious ingredients and for being the Frankenstein's monster of junk food.

“If you think about how hot dogs are made, you won’t want to eat them again. … They take out everything, all the great pieces, and the rest is used for hot dogs,” Charlebois said.

But of course, the quality of hot dog or sausage ingredients can vary.

Maple Leaf Foods did not respond to questions about the ingredients in the Schneiders hot dogs it supplies to the Jays. In the descriptions for several of its weiners listed on its website, Schneiders says it uses “premium cuts.”

No matter how you feel about eating one animal part or another, the cuts used to make a hot dog affects the price of production, and hence margins.

Soloway’s manager Oleg Perelstein said that the company’s hot dogs are made from “trim.” (To learn more about ingredients commonly found in hot dogs, the National Hot Dog and Sausage Council based in Washington, D.C., has a Hot Dogs Ingredients Guide.)

Ingredients aside, in the long run the perception that hot dogs are unhealthy may pose a challenge to the Jays and other hot-dog slinging vendors, who are contending with changing consumer tastes. Partly due to an increasing consumer preference for healthier foods, the global hot-dogs-and-sausages market is expected to grow at a “sluggish” rate between 2015 and 2024, according to a recent report by Transparency Market Research.

But the emergence of more health-conscious consumers may have a limited impact at live sporting events where, Charlebois said, health is “not a decision criteria.”

“It’s a stadium with people and a game, and it’s part of the experience of devouring something you probably wouldn’t purchase normally at any other event or a grocery store or in a restaurant,” Charlebois said.

“I think people accept the fact that once you actually are at a game, you are a guest and you are expected to spend. But if you don’t want to spend, it’s really up to you.”