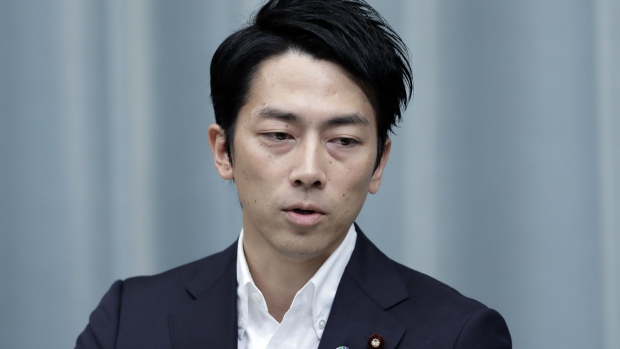 (Bloomberg) -- Efforts by Japan’s popular 39-year-old environment minister to curb the government’s support for coal-fired power may be failing, a potential blow to restricting use of the most-polluting fossil fuel amid rising concerns over climate change.

The push by the minister, Shinjiro Koizumi, centered on forcing a review this year by Prime Minister Shinzo Abe’s administration into Japan’s promotion of coal power technology overseas. It’s one of the highest-profile efforts from within the government to end its support for coal, echoing criticism that’s mainly coming from overseas activists that Japan’s policies are increasingly at odds with a global shift to green energy.

While the revised technology export policy is expected to shift focus toward supporting renewables, it will continue promoting Japan’s coal-fired power plants for export to developing nations, according to people with knowledge of the situation. The new policy will also say Japan’s long-term goal is to help developing nations decarbonize, but this new language will largely be symbolic, said the people, who asked not to be identified as the report isn’t complete and no final decisions have been made.

“If that is the result of the review, it’s very disappointing,” said Kimiko Hirata, an international director at Kiko Network, a Japan-based group that promotes climate-friendly policies. “Japan, already far behind other nations in actions to curb emissions, is missing a chance to catch up with them.”

The review is expected to be finished by July 10, the people said.

The Ministry of Economy, Trade and Industry, which sets the foundations of the nation’s energy policy, declined to comment, as did Koizumi’s environment ministry. The cabinet office, which is coordinating the review with additional participation from the ministries of finance and foreign affairs, didn’t respond to requests for comment.

As investors and governments begin prioritizing the fight against climate change, Japan has come under increasing scrutiny for policies that encourage its industrial and financial giants to back building new coal plants, particularly in Southeast Asia.

Japan’s current energy-infrastructure export policy, adopted in 2018, supports requests from developing nations seeking Japan’s coal-power technology. Under those guidelines, such assistance is provided when coal is the only economically viable option and when it’s in line with the recipient country’s energy and climate policies.

Japan has promoted its high-efficiency coal technology as the cleanest in the world and the best option for poor countries facing soaring electricity demand. Compared with lower-quality plants, Japan’s generation facilities can contribute to curbing carbon emissions, a METI official said in March.

In addition to calls for dramatically cutting global carbon emissions, activists have also warned investors that if restrictive regulations emerge on greenhouse gas emissions, it could force such plants to close before they pay off their debts, leaving them with so-called stranded assets on their books. While several of Japan’s commercial banks are tightening coal lending, including Mizuho Financial Group Inc. and Mitsubishi UFJ Financial Group Inc., some investors and activists are calling for even stricter polices.

Japan’s current policy review is an opportunity to move public finance away from fossil fuels and promote cleaner technology, according to the Asia Investor Group on Climate Change.

“Investors in Asia are ready to underpin the transition toward a zero-carbon economy with a significant reallocation of capital to clean energy technologies,” said Shin Furuno, a project manager with AIGCC. “Japanese financial institutions and companies have significant financial and technical capabilities, and if strategically deployed could quickly make the country a regional leader in the zero-emissions energy transition.”