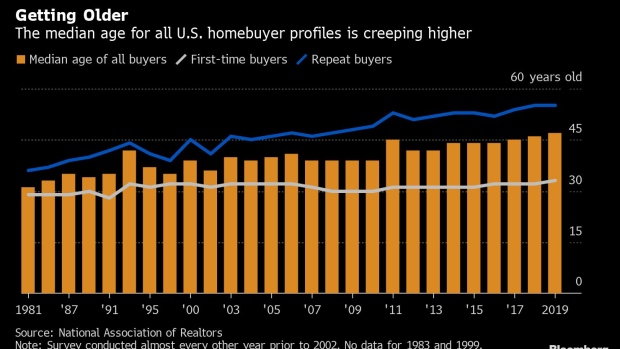 An "Open House" sign is displayed in the front yard of a home for sale in Columbus, Ohio, U.S., on Sunday, Dec. 3, 2017. The National Association of Realtors is scheduled to release existing homes sales figures on December 20. Photographer: Ty Wright/Bloomberg , Bloomberg

(Bloomberg) -- Faced with higher property prices and piles of student debt, Americans are getting older and older before they buy a home.

The median age of first-time home buyers has increased to 33, the oldest in records dating back to 1981, according to a National Association of Realtors report released Friday. The median age of all buyers also hit a fresh record, 47, increasing for a third straight year -- and well above the median age of 31 in 1981.

While the median age of first-time home buyers only rose by one year, the increase reflects a variety of factors facing Americans searching for a home.

A nationwide shortage of affordable housing, coupled with lower mortgage rates, has stoked prices in cities from the coasts to the heartland. At the same time, student loans and other debts make it harder for Americans to save tens of thousands of dollars for a down payment, while tight lending standards can make getting a bank loan difficult for borrowers with less-than-stellar credit scores.

The characteristics of home buyers have changed in recent years. The share of married couples has declined as unmarried couples and those purchasing as roommates has risen.

As buyers’ ages have increased, so have their incomes. The typical income of purchasers rose to $93,200 in 2018 as a lack of affordable options squeezed lower-income potential buyers out of the market.

Higher prices of homes have also changed how first-time buyers are entering the market. Nearly a third of first-time home buyers said they used a gift from a relative or friend to fund their down payment.

Builders have cited a shortage of affordable lots and labor as reasons to build fewer or bigger single-family homes, leaving America’s growing population to consider more of the existing housing stock. New homes as a proportion of all purchases fell to a low of 13% in records dating back to 1981.

The report reflects survey responses from 5,870 people who purchased a primary residence in the period between July 2018 and June 2019.

--With assistance from Sophie Caronello.

To contact the editors responsible for this story: Scott Lanman at slanman@bloomberg.net, Alister Bull