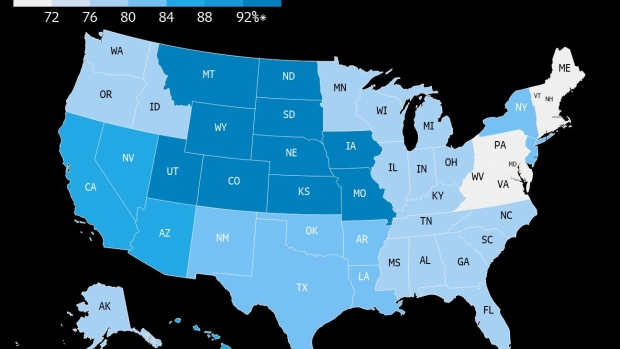 (Bloomberg) -- Doctors and nurses in Missouri, where the delta virus variant has been causing Covid-19 cases to soar, are seeing patients who are younger and seem to be worsening faster than ever before.

“I don’t remember anyone declining within 24 hours, until now,” said Rachel Keech, a physician with Missouri’s Mercy health system who specializes in caring for hospitalized patients. “Patients are coming to the hospital sooner. They’re requiring higher levels of oxygen faster. And then maximizing out on what hospitalists can do, and needing to go to the ICU faster.”

U.S. Covid deaths still remain far below last year’s heights, but foreboding numbers from Keech’s state are setting off warning bells for the rest of the country.

New hospital admissions for Covid per 100,000 people more than tripled in Missouri between early June and the end of last week.

The relative increase was biggest among those in their 40s -- nearly 400% -- with smaller but still significant percentage rises among people in their 60s and older.

While it’s unclear how widespread these trends are, Keech’s practice is just one example of how ever-more-contagious variants are changing the face of the pandemic in spite of vaccines. Meanwhile, hospital beds are filling up in conservative, vaccine-shy states just as they are in Asian, African and South American countries that can’t afford shots or don’t have access.

Despite a surplus of Covid-19 vaccines, only about half of Americans are fully vaccinated, and only about a third in Alabama and Mississippi. The lag spells trouble for the country’s bid to end the pandemic. Along with hospital wards, intensive care units are reaching capacity and staffing is scarce in Midwest and Southeast hotspots. Frustration is especially high among weary health-care personnel after a long, draining year of fighting Covid, which is now largely preventable.

“I don’t know how it’s going to end and how bad it’s going to get,” said Michael Saag, an infectious disease doctor and professor at the University of Alabama at Birmingham. “People thought they knew what Covid was prior to delta. But now that delta is here, I think they’re having to relearn.”

At a July 22 briefing, Biden administration officials emphasized the weapons at society’s disposal. More than 160 million Americans have been fully vaccinated, a figure that includes many vulnerable individuals, White House coronavirus response coordinator Jeff Zients said in a briefing.

In an effort to get the spread of the variant under control, California will mandate state employees to prove they’ve been vaccinated or wear a mask in the office and get tested for the coronavirus at least once a week. New York City is taking similar action for its municipal workforce -- and the city’s mayor has already asked private businesses to follow suit. Meanwhile, the CDC is returning to stiffer guidance on the use of masks, advising people in hard-hit areas to use them in indoor public settings, regardless of vaccination status.

Some key numbers are going the wrong way. The seven-day daily average of new U.S. cases rose 53% last week, and average daily hospital admissions rose by a third, Centers for Disease Control and Prevention Director Rochelle Walensky said at a Thursday briefing. And about 40% of all U.S. cases came from Florida, Texas and Missouri, which have relatively lower vaccination rates.

The country is “at another pivotal moment in this pandemic,” she said.

The delta variant now makes up about 83% of U.S. cases analyzed by genetic sequencing. While the strain is known to be more contagious and patients who are infected with it have significantly higher viral loads, whether it may be causing worse disease or quicker onset of illness isn’t clear. It appears that the strain binds a protein on some human cells, called ACE2, more tightly than earlier versions, and that may allow it to grow faster and spread through the body more rapidly.

The trend, meanwhile, accompanies a shift within hospitals to younger patient populations. Just shy of 90% of Americans 65 or older have received at least one vaccine dose, according to CDC data. Coverage is far sparser among the young, leading to more people in their 30s, 40s and 50s becoming hospitalized with Covid-19 -- and some are in their 20s or children, providers say.

In Missouri, new Covid-19 hospitalizations among all age groups under 60 spiked higher last week than they did early this year, during the state’s winter surge.

Covid-19 deaths in the state, meanwhile, have remained at low levels, with 24 confirmed in the last week. Medical providers have also gained some new tools to treat the disease over the course of the pandemic that may lead to better outcomes. And deaths are known to be a lagging indicator with Covid-19, usually rising a few weeks after cases surge.

But lately, Lake Regional Health System’s 100-bed hospital located in Missouri’s the Lake of the Ozarks region, a popular summer vacation destination, is filling up. About 30% of its patients on a recent Tuesday had Covid-19, including about half those in intensive care, according to Sangha.

Cases among younger people echo one grisly feature of the fearsome 1918 influenza pandemic, which was known for unusually high death rates among young adults. Usually flu deaths are concentrated among young children and the elderly, while sparing those in between.

“Men and women in their 20s and 30s were getting very sick and dying,” said E. Thomas Ewing, a history professor at Virginia Tech who studies the 1918 pandemic. The reasons for the severity still aren’t completely clear, he said.

Data from the U.K. suggests that the risk of hospitalization within two weeks of contracting the delta variant is more than twice as high as with alpha, the strain that surfaced in the southern county of Kent, Bloomberg Intelligence analyst Sam Fazeli wrote in a mid-June report. The number of people going to the emergency room or getting hospitalized with delta is about 45% greater, he said.

“I think it’s possible, if not probable, that there’s more rapid disease progression,” said Alabama’s Saag, who said he hasn’t seen data to back up that impression. “That fits with the biology.”