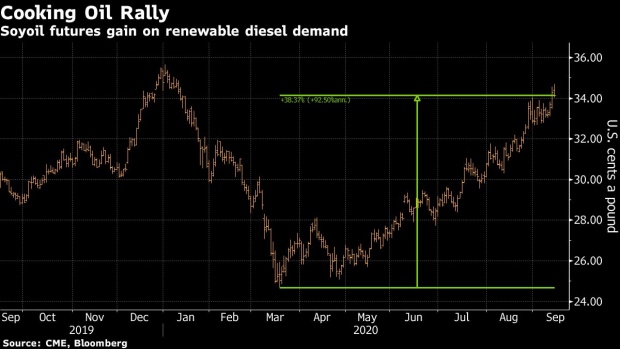 (Bloomberg) -- It’s not the most obvious connection, but your Amazon.com Inc. orders are actually helping fuel a rally in cooking oil futures.

That’s because a surge in online orders during the pandemic has boosted miles for trucks, usually powered by diesel and its green alternatives. While many makers of renewable diesel in places like California prefer used cooking oil as a feedstock, restaurant shutdowns means there’s less of that available.

That’s where soybean oil comes into play. Futures traded in Chicago have rallied almost 40% since a low in March, when lockdowns from New York to Los Angeles hit demand for most commodities. The U.S. Department of Agriculture is already forecasting its use to make biodiesel will jump more than 3% this season after declining a year earlier.

“Truck traffic has been moving along,” said Mac Marshall, vice president of market intelligence for the United Soybean Board and the U.S. Soybean Export Council. “I’m probably going to get five Amazon packages at my door today. When you think about the long-haul truck fleets, those are primarily consuming diesel so the demand on the biodiesel side hasn’t abated.”

Ethanol producers grabbed national headlines earlier this year as the coronavirus kept cars off the road, shutting off plants across the U.S. But while traffic for passenger cars -- mostly powered by gasoline mixed with ethanol -- plunged and was still down 16% from a year earlier in the week ended Aug. 30, truck miles were up 5%, data from the Department of Transportation shows.

The shutdown of meat plants across the U.S. earlier this year also starved renewable diesel makers of the animal waste many use as a feedstock, Marshall said. Many makers of renewable diesel use tallow, a rendered form of beef or mutton fat.

“You’ve had a decline in slaughter in the second quarter, which meant less available supplies of feedstock on the rendering side, but you are also having less restaurant traffic and lower repurposed grease volumes,” he said. “That’s been an opportunity for soyoil to get bid up as a feedstock, so we’ve seen a nice price appreciation.”