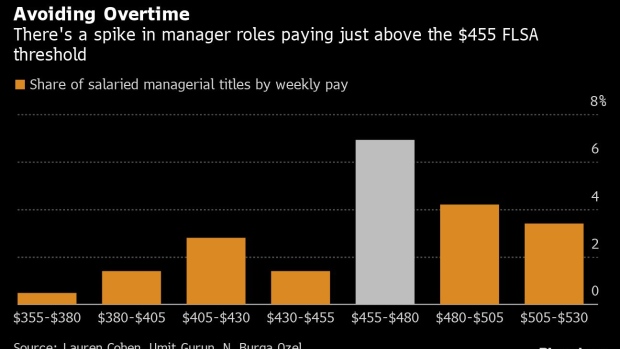 (Bloomberg) -- Companies avoid paying about $4 billion in overtime wages by inventing dubious titles for US employees such as “director of first impressions” and “lead shower door installer,” according to new research on a common practice that skirts federal labor law.

The practice, often deployed by retail and restaurant companies, takes advantage of the Fair Labor Standards Act (FLSA), which exempts firms  from paying overtime wages if the employee is a manager and gets paid a salary above a certain threshold. From 2010 to 2018, the researchers found a 485% increase in job postings for salaried employees in dodgy managerial roles where duties rarely included any actual management. Companies avoided paying overtime on more than 151 million work hours via this practice, the study found, costing workers an estimated $4 billion in pay.

Other suspect job titles identified by researchers included carpet shampoo manager, price scanning coordinator and guest experience leader. Even though companies such as Walmart Inc. and JPMorgan Chase & Co. have paid millions of dollars in fines and settlements over the years for violating the federal overtime rules, the researchers said the practice remains commonplace as the penalties pale in comparison to what firms can save by deliberately misclassifying staffers.

Companies continue to dodge overtime pay despite “full knowledge of potential litigation,” said the researchers, professors at Harvard Business School and the University of Texas at Dallas.

The study was released by the National Bureau of Economic Research, an organization whose largest funding sources include the Social Security Administration and the Alfred P. Sloan Foundation. NBER says it doesn’t make policy recommendations or carry out advocacy on the basis of research findings.

Wage theft ranks among the top corporate violations after workplace safety infractions, according to the study. Family Dollar, now part of Dollar Tree Inc., had to pay more than $30 million after a 2006 ruling in Alabama for denying overtime pay to 1,424 store managers, and later faced similar charges in Colorado and New York. But it doesn’t just happen at lower-wage industries. Facebook, now called Meta Inc., and Goldman Sachs Group Inc. have also been accused of misclassifying workers to avoid paying them overtime.

“The strategic use of titles persists across industries, geographical location, the firm size distribution, and through the present day,” the researchers said.

The practice was more common in states where employees have fewer protections, and when employers had more bargaining power and faced less competition for workers, the study found. When workers were better educated, it happened less. There was no similar spike in the use of dodgy titles at the same firms for their hourly employees, who must be paid overtime under the FLSA. The threshold for overtime pay used in the research was $455 a week, or $23,660 a year, which was increased to $684 a week in 2020.

“The findings are the tip of the iceberg,” the researchers said. “Overtime avoidance can occur at other salary levels too and in different ways.”

(Updates with comment from researchers in seventh paragraph. An earlier version corrected the spelling of a researcher’s name in the chart.)