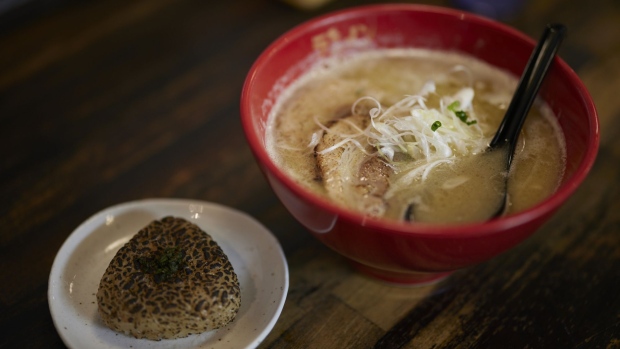 Mannequins display clothes at a Uniqlo store in Ginza. , Bloomberg

(Bloomberg) -- When Japan finally opens its doors to vaccinated tourists on Oct. 11, many travelers are going to find great bargains.

The yen has lost about 20% of its value against the dollar this year, making hotels, meals and attractions very affordable for visitors with the US currency. At the same time, inflation has been kept mostly under control, although the country is starting to see price increases for the first time in a generation.

After keeping Japan’s border mostly closed to tourists since the start of the pandemic, the island nation is eager for an economic boost, with Prime Minister Fumio Kishida saying he wants these inbound visitors to spend 5 trillion yen ($34.5 billion) annually.

All prices below are converted at the current exchange rate of 144.80 yen a dollar. Travelers may get a worse deal from their bank or credit card provider, in addition to other fees. Prices include sales tax but exclude tips. Tipping isn’t expected anywhere in Japan.

Tokyo boasts plenty of Michelin-starred restaurants, but — as anyone who has visited the country knows — quality cheap eats can be found everywhere. A well-made bowl of ramen starts at $5.20, and even refined versions with all the fixings top out at about $10. A comparable bowl at New York City’s Totto Ramen costs $16.

Omakase sushi courses can start at around $35, and a decent meal with drinks can be had for roughly the same amount. At Sushi Katsuei in New York, described as good and reasonable, the omakase starts at $65, excluding any tips or service charges.

A couple hours of beer, highballs or chu-hai at an izakaya bar along with a decent amount of food to nibble on will seldom cost more than $40 to $50 in central Tokyo, at least a third less than the equivalent amount of food and drink (probably of lesser quality) in New York.

A double room at a three-star hotel can be booked for less than $55 a night in Tokyo, while the best deals on similar rooms in Manhattan start at $180. Budget travelers who don’t mind sharing a bathroom can bunk in a capsule hotel in central Tokyo for as little as $21, less than half of the cheapest hostel-style options in New York City.

For a thoroughly Japanese take on luxury accommodation, a night in a traditional ryokan inn can run about $175 a person, dinner and breakfast included. Again, that’s less than half the price of similarly plush lodgings in New York.

About $600 for two is the ceiling for a ryokan experience with stunning views of Japan’s vibrant autumn leaves and outdoor hot spring baths in Hakone, a resort town less than two hours by train from Tokyo.

For about $102, the Nozomi super-express bullet train moves travelers to Osaka from Tokyo in about two and a half hours. Covering the same distance of 514 kilometers (319 miles), roughly Boston to Philadelphia, quickly by plane would cost about $170 on average, according to Kayak.

Tokyo’s extensive subway network charges more the further the journey, but most trips between the city’s hub stations will cost no more than $1.40, dwarfed by the New York City subway’s $2.75 flat fare.

Strict regulations on ride-sharing mean the city’s taxis have been able to maintain their prices. A 15-minute daytime ride between Tokyo Station and Roppongi will cost about $14, roughly the same distance and cost as a cab ride from the West Village to Times Square in New York.

Tokyo Disney Resort’s single-day pass for adults starts at $54.60, about half the $109 starting price of a single-park, single-day ticket at Walt Disney World in Florida. For a family of two adults and two children under 10, these passes will start at $176 in Tokyo versus $426 in Florida.

To look down on the city from the lofty Tokyo Skytree tower, a combo ticket for an adult starts at $21, a bargain compared with $77 to take in the view from atop the Empire State Building.

Most museums, temples and attractions in Tokyo and the ancient capital of Kyoto are free, or charge, at most, the equivalent of $15.

In a pinch, tourists can find a change of clothes at one of Japan’s Uniqlo stores, where a men’s dress shirt will cost around $21. In the US, the apparel retailer charges $39.90 for similar shirts.

A medium-sized suitcase at Bic Camera in Tokyo will have a price tag of around $113, while a product of similar size and quality at Empire Luggage in Manhattan can cost $250.

Snacks and sundries at any of Japan’s ubiquitous convenience stores will seem like a bargain for travelers, with prices generally 20% to 30% cheaper, in dollar terms, compared with a big US city.

A lost or broken pair of eyeglasses needn’t leave travelers squinting for the rest of their trip. They can walk into one of the hundreds of branches of discount lens chains such as Jins and Zoff, and get a new pair made up in as soon as 40 minutes. The total for basic frames and lenses is $38, including the exam, can be less than half the cost at a Walmart or similar vision center in the US.