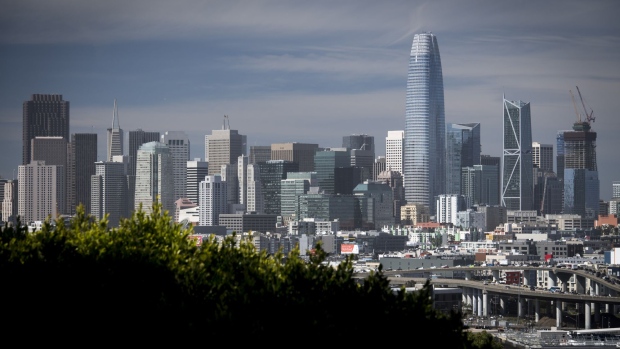 The Salesforce Tower, center right, stands in San Francisco, California, U.S., on Thursday, May 10, 2018. The building, the tallest office tower west of the Mississippi river, opened with a ceremony crowded with local officials on Tuesday, representing the indelible mark San Francisco's largest private employer has made on the city. Photographer: David Paul Morris/Bloomberg , Bloomberg

In July, then-National Security Adviser John Bolton cut short a meeting with Ukrainian officials when U.S. Ambassador to the European Union Gordon Sondland proclaimed that investigating former Vice President Joseph Biden and others would be the price of an Oval Office meeting for Ukraine’s president. This according to a transcript of testimony by Alexander Vindman, the director for European Affairs on the National Security Council and a decorated lieutenant colonel in the U.S. Army. Vindman called the prerequisite inappropriate. On Friday, President Donald Trump began to attack next week’s public impeachment hearings while acting White House Chief of Staff Mick Mulvaney rebuffed a subpoena to testify, claiming “absolute immunity.”

The hearings, a rare occurrence in the history of American politics, will likely start with a bang, Noah Feldman writes in Bloomberg Opinion.

Post-recession rules left traders with less money to deploy and regulators looking over their shoulders. The result is lower risk and smaller paydays.

Senator Elizabeth Warren’s proposed wealth tax could be a gift to an industry she has accused of looting America—private equity.

An online merchant has lodged an antitrust complaint against Amazon, claiming the company forces sellers to use its expensive logistics services.

Steve Bannon testified at Roger Stone’s criminal trial that Stone told him he “had a relationship” with WikiLeaks and its founder Julian Assange.

Trump said he hasn’t agreed to roll back all tariffs on China, cooling hopes the U.S. would make such a concession to secure a trade deal. After a week of contradictory news on the subject, market reaction was mixed.

What’s Luke Kawa thinking about? The Bloomberg cross asset reporter says the Treasury market is on the verge of lurching from “recession” to “reflation.” It’s all part of a global bond bloodbath, he says, with Japanese yields jumping and French and Belgian 10-year yields rising back into positive territory.

What you’ll want to read in Businessweek

It was meant to be the latest San Francisco gold rush. After a startup boom that saw tech unicorns amass lofty valuations, this was the year whendreams of IPO riches were supposed to become a reality. A city already flush with wealth prepared for another spending spree by thousands of newly minted millionaires. Then came the drumbeat of disappointing debuts: Lyft tumbled, Uber slid, Slack sagged and WeWork’s listing plans collapsed in an epic bust.