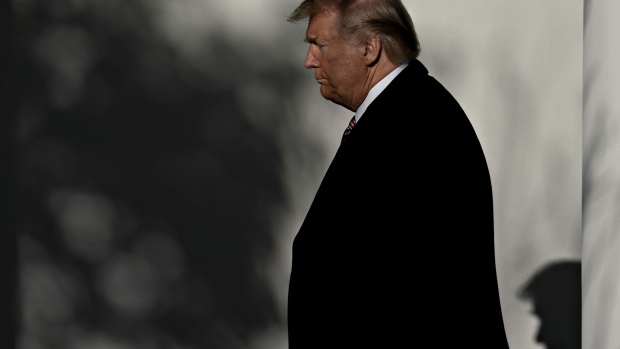 U.S. President Donald Trump walks through the Colonnade of the White House with Boyko Borissov, Bulgaria's prime minister, not pictured, in Washington, D.C., U.S., on Monday, Nov. 25, 2019. Trump and Borissov are expected to discuss security in Eastern Europe and comes after a series of meetings to address security in a region where Russia seeks to retain its traditional influence. , Bloomberg

The House Intelligence Committee released its report on the impeachment inquiry into President Donald Trump. According to the committee, Trump “publicly and repeatedly” urged foreign governments to investigate former Vice President Joseph Biden, compromised national security and intimidated and tampered with witnesses. “This continued solicitation of foreign interference in a U.S. election presents a clear and present danger that the president will continue to use the power of his office for his personal political gain,” the report stated. The House Judiciary Committee now takes over, and on Wednesday is expected to hold its first hearing on the constitutional issues surrounding impeachment.

The world’s average temperature may increase as much as 5 degrees by 2100, the Wold Meteorological Organization said. That’s almost triple the goal set by the Paris accord, and far higher than earlier estimates.

Stocks dropped around the world and bonds rallied after Trump threatened tariffs on economies from South America to Europe.

If Trump’s other threatened tariffs (on China) kick in as planned Dec. 15, it may shatter consensus that a partial end to his trade war is coming.

Larry Page and Sergey Brin, the founders of Google, will step down from their roles as chief executive officer and president of parent Alphabet.

San Miguel de Allende oozes old Mexico charm. Its colonial-era buildings, cobblestone streets and neo-Gothic church made it popular with tourists. Lately, the city has been attracting a very different sort of crowd: drug cartels.What’s Joe Weisenthal thinking about? The Bloomberg news director is talking about the eventual hand-off from monetary to fiscal policy. In an interview this morning on Bloomberg TV, Saxo Bank CIO Steen Jakobsen said that he expects a Boris Johnson government in the U.K. to unleash the biggest fiscal expansion since the 1970s.

What you’ll want to read in Bloomberg Markets

For weeks during the summer of 2017, thousands of computers at Merck were down. Hackers demanded 300 bitcoin per computer to stop the attack, which used software created by Russia’s military intelligence agency. The White House called it the “most destructive and costly cyberattack in history.” Merck went to its insurers and was stunned when most denied coverage because the company's policies excluded a very specific class of risk: an act of war. Now the claim is in court and the dispute could have far-reaching consequences.