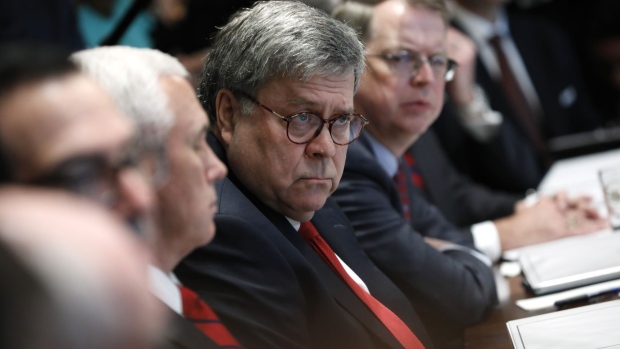 The judge who will ultimately sentence Roger Stone is no stranger to Trump's extended universe of convicted allies. Amy Berman Jackson has overseen some of the biggest cases arising out of Special Counsel Robert Mueller's investigation of Russian interference in the 2016 election, including the trial and conviction of Paul Manafort. While some of her past rulings have infuriated Trump, she ruled in his favor on Feb. 10, tossing out a lawsuit in which watchdogs asked her to order the White House to retain records of his meetings and calls with foreign leaders. Trump on Thursday said he is considering blocking administration officials from listening to those calls, after a whistle-blower complaint about his conversation with Ukrainian leader Volodymyr Zelenskiy led to his impeachment.

In a win for Amazon, a federal judge temporarily blocked rival Microsoft from working on a $10 billion Pentagon cloud-computing contract.

It started with a fever and a midnight visit to a hospital. One man's successful battle against the coronavirus lasted two excruciating weeks. Many others haven't been as lucky. Researchers warn the virus could eventually affect two-thirds of the world's population.

The U.S. raised the stakes in its battle with Huawei, using a law historically associated with prosecuting mafia figures to allege that the Chinese company engaged in decades of intellectual property theft.

The world is throwing away more than twice as much food as previously thought. Why the revision? An earlier calculation didn't take into account that rich people waste more than the poor.

Softbank made a $375 million bet on Zume, a company pitching pizza-making robots. It didn't go well.

What’s Sid Verma thinking about? The Bloomberg cross-asset reporter says assets sensitive to monetary stimulus, economic growth, trade and credit demand are all roaring right now. European stocks have been rising to new heights this week even as the euro plunges to its lowest levels since 2017. Even as large chunks of China’s economy come to a standstill, developed markets are teeming with animal spirits. Aside from the obvious reasons—Fed action, strong corporate earnings, still-resilient global growth—Chris Weston of Pepperstone Financial suggests another signal from the bullish action this week. The higher probability of Senator Bernie Sanders getting the Democratic nomination appears to be boosting expectations of a Trump victory.

What you’ll want to read tonight in Pursuits

When the Museum of Ice Cream first opened is doors in Manhattan's Meatpacking District in 2016, it wasn't really a museum. Those who paid for an $18 ticket could dip their toes in a swimming pool filled with plastic sprinkles and walk through a room that smelled like chocolate. Most importantly, perhaps, they could take perfectly-staged photographs in front of its candy-colored walls. The format has been a hit, with permanent outposts in Manhattan and San Francisco selling tickets at nearly $40 a pop, a line of ice cream in Target and a licensing deal with Sephora that includes a popsicle-shaped eye-shadow palette. But critics have consistently pointed to the MOIC as an example of our social-media obsessed culture. Now co-founder Maryellis Bunn is developing a new format in an attempt to prove her venues are more than selfie havens. The most important part of the new experience? No phones.

To contact the authors of this story: Josh Petri in Portland at jpetri4@bloomberg.netDavid Rovella in New York at drovella@bloomberg.net