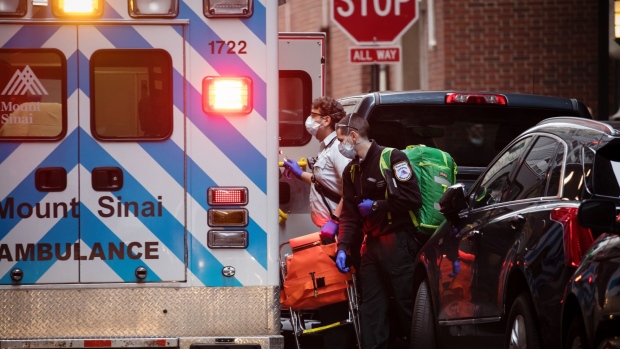 Medical workers in a Monut Sinai ambulance respond to a call in the Financial District of New York, U.S., on Monday, March 30, 2020. Roughly 37,500 people have tested positive for the coronavirus in New York City, officials said on Monday, up about 3,700 from a day earlier. Photographer: Michael Nagle/Bloomberg , Bloomberg

As cities and states scramble to find the necessary supplies to battle a dangerous respiratory disease that has killed more than 3,000 Americans, the Trump administration on Tuesday took the final step in its three-year effort to dismantle Obama-era pollution regulations by lowering auto emissions standards. Almost half of the 50 states are ready to sue the administration over the new regulations. Even some major automakers oppose the move, and have agreed instead to manufacture cars that meet California’s more stringent emissions standards.

Bloomberg is mapping the pandemic globally and across America. For the latest news, sign up for our Covid-19 podcast and daily newsletter.

Spain had its deadliest day yet while Italy’s new Covid-19 cases have leveled off. Social distancing appears to be slowing the spread of the virus on the U.S. West Coast, though nationally it has crushed retail, dining and hotels. Scientific research frantically continues: Dutch scientists were able to find the coronavirus in a city’s wastewater before any cases were reported, demonstrating a novel early warning system. Still, widespread, accurate testing would have provided a clearer view of the virus and its spread, and likely saved countless lives.

U.S. hospitals are firing doctors and nurses who publicize their working conditions during the coronavirus pandemic. In Chicago, a nurse was fired after emailing colleagues that she wanted to wear a more protective mask while on duty. In New York, the NYU Langone Health system has warned employees they could be terminated if they talk to the media without authorization. Doctors any nurses have been dying in increasing numbers.

New York has seen more than 1,500 Covid-19 deaths so far, or roughly half of all U.S. fatalities from the pandemic, and public health officials say the worst is weeks away. Subway ridership is down 90% in New York City and the Metropolitan Transportation Authority says the system will require a federal bailout. Eventually, the pandemic will pass, writes Tyler Cowen in Bloomberg Opinion, but the city that emerges will be younger, cheaper, poorer and segregated in a new way.

Trump is expected to announce a deferral for some tariff payments, though not those stemming from his long-running trade war with China.

Visa and Mastercard are fighting for their own piece of the current U.S. bailout package. Both payment companies want to be an option for people looking to claim their $1,200 relief checks.

What’s Joe Weisenthal thinking about? The Bloomberg news director says state and local governments are on the front lines of the crisis—both medically and economically. Unlike major developed market economies, however, they don’t have the same capacity to increase deficits and debt, giving them little choice but to implement spending cuts at the worst possible time. Joe says they should be the centerpiece of the fourth round of stimulus being discussed in Washington.

What you’ll want to read in Bloomberg Checkout

Barter, the trade system prevalent in the Middle Ages, is back in the time of pandemic, with a modern twist. Social networks Facebook and Nextdoor are flooded with posts from neighbors and friends seeking to swap eggs for toilet paper. Small and midsized businesses, whose cash trade has dried up thanks to shelter-in-place orders, are turning to online barter exchanges. In normal times, the roughly 200 barter exchanges in the U.S. let roofers fix leaks and get paid in restaurant takeout or accounting services. With tens of millions of Americans homebound, those cash-free trade systems are seeing an influx in participants.