Across the world, a dearth of workers is shaking up food supply chains.

In Vietnam, the army is assisting with the rice harvest. In the U.K., farmers are dumping milk because there are no truckers to collect it. Brazil’s robusta coffee beans took 120 days to reap this year, rather than the usual 90. And American meatpackers are trying to lure new employees with Apple Watches while fast-food chains raise the prices of burgers and burritos.

Whether it’s fruit pickers, slaughterhouse workers, truckers, warehouse operators, chefs or waiters, the global food ecosystem is buckling due to a shortage of staff. Supplies are getting hit and some employers are forced to raise wages at a double-digit pace. That’s threatening to push food prices — already heated by soaring commodities and freight costs — even higher. Prices in July were up 31 per cent from the same month last year, according to an index compiled by the United Nations’ Food and Agriculture Organization.

The coronavirus pandemic has helped spark a labor shortfall for many parts of the economy. But the impact is particularly stark in food and agriculture, which are among the world’s least-automated industries. Food security is a sensitive issue in many parts of the world and thin margins mean rising costs generally pass through to buyers, according to Boston Consulting Group.

“Almost certainly there is disruption,” said Decker Walker, BCG’s agribusiness expert in Chicago. Effects vary among locations and products, he said, but “the general theme seems to be: The roles with the least desirable working conditions are actually the ones that we have the most pain with.” 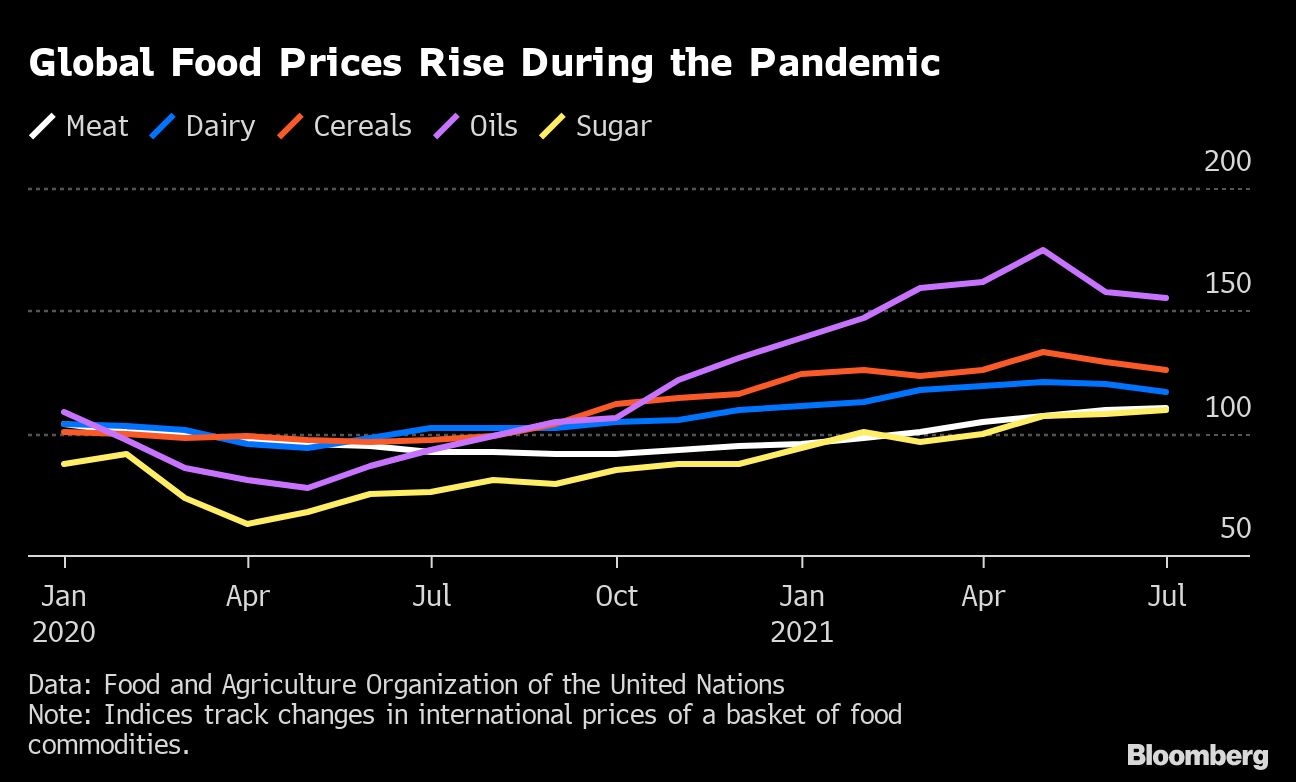 There are signs the labor shortfall is curbing supplies. In the U.S., wholesale distributors like Sysco Corp. and United Natural Foods Inc. are reporting production delays and slowdowns for items ranging from bacon and cheese to coconut water and spices. In the U.K., some stores are running low on staples like bread and chicken, while McDonald’s Corp. ran out of milkshakes in August.

“We have family-wage, great jobs that have been open, that we’ve been recruiting really hard for and have had trouble filling,” said Patrick Criteser, chief executive officer of Tillamook County Creamery Association. The Oregon-based dairy co-operative recently ran so short of workers that a board member had to skip an operational meeting to help out in the fields. “With the inflation we’re seeing in the business and the inflation that we’re seeing at the farm level, it’s going to translate to the shelf.”

Shortages are hitting farms, processors and restaurants alike. Malaysia, the world’s No.2 palm oil producer, has lost about 30 per cent of potential output of the edible oil used in everything from chocolate to margarine. Shrimp production in southern Vietnam — one of the world’s top exporters — has dropped by 60 per cent to 70 per cent from before the pandemic. And a fifth of tomato production in the South of Italy has been lost this year, due to the scorching heat and transport paralysis, according to the farmers’ association CIA.

“I have been in this business since the ’80s, but I have never seen a situation like this,” said Michele Ferrandino, a farmer in Foggia. “Tomatoes are very perishable goods. There were not enough trucks to transport the crop to the processing plants, in those crucial days” of the harvest, he said.

Canceled or delayed deliveries have also forced British dairy farmers like Mike King in South Gloucestershire, England to dump milk while stores run short. King estimates he has lost some 20,000 liters (5,283 gallons), and says some farmers have resorted to milking their cattle less frequently due to staffing shortfalls.

Even as restaurants and other businesses re-open in the U.S. and parts of Europe — boosting demand for goods such as meat and bottled drinks — the delta variant is spreading in places like Southeast Asia, curbing primary production. Other, longer-established pandemic effects are still causing problems too: COVID outbreaks continue to crop up in meat- and fish-processing plants, forcing temporary closures, and border restrictions in countries from the U.K. to Thailand are limiting the supply of migrant workers.

In some places, the scramble for staff is compounded by local issues, such as difficult and dangerous farmwork conditions caused by a record U.S. heatwave, or the disruption of Brexit. 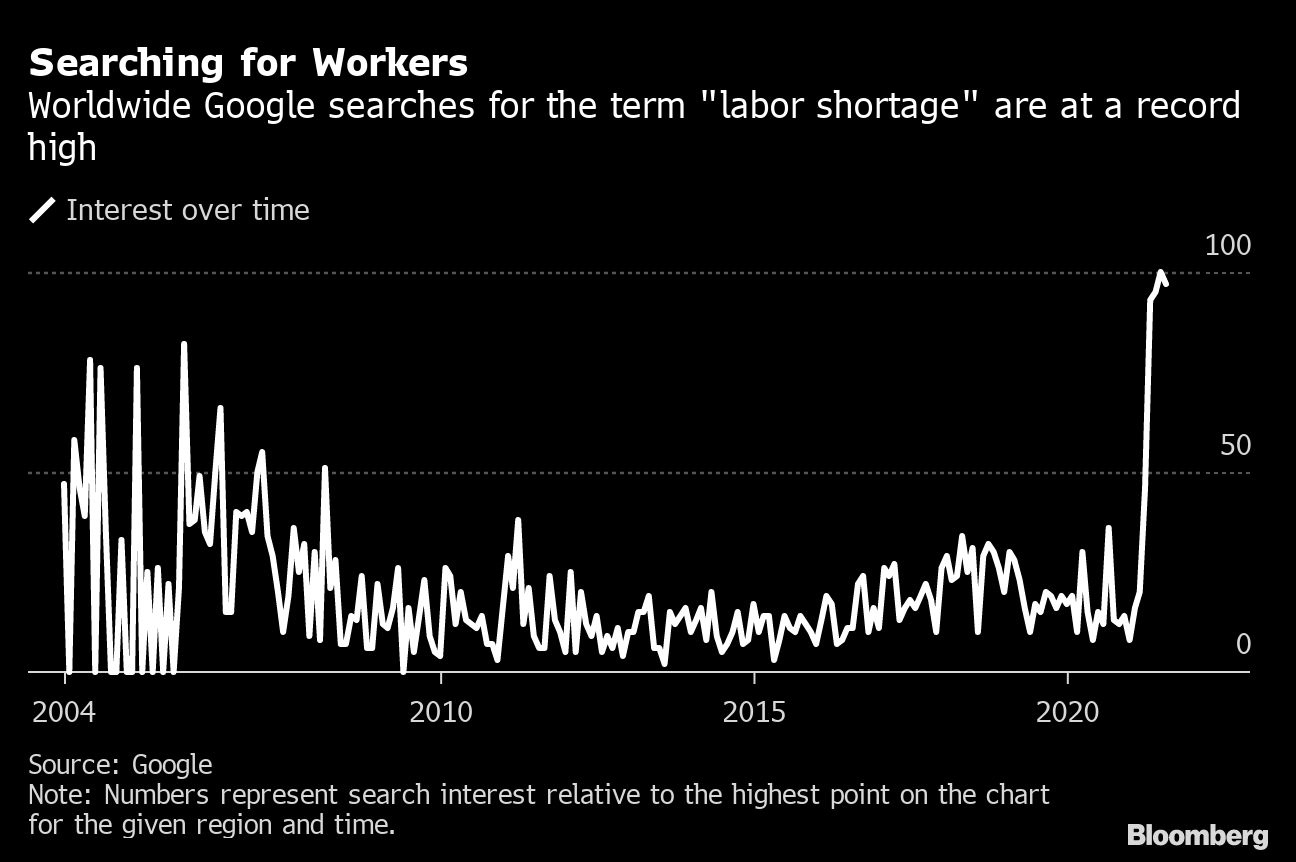 As a result, employers face another hurdle: Workers have plenty of options.

The current economy is creating “choice where choices may not have existed in the past,” said BCG’s Walker. When “the entire world is short-staffed,” filling less desirable jobs gets more difficult, he said.

Employment in the food supply chain can certainly be tough. Whether it’s backbreaking strawberry picking, insecure slaughterhouse work or the fast-paced, high-pressure environment of a restaurant kitchen, many jobs are physically taxing, short-term, poorly paid — or a combination of all three.

With more jobs available, Australian workers who might previously have settled for positions at meat processing plants in sparsely populated areas can opt for work in busier towns instead. Many of the European Union citizens who might typically travel to the U.K. to work on farms, in haulage or serving coffees are choosing to stay in their home countries or on the continent. American laborers who have struggled with sweltering heat in the fields may choose the cool interiors of a store instead.

Jon DeVaney, president of the Washington State Tree Fruit Association, acknowledges that work such as fruit picking is demanding.

“It is a physical job,” he said. “You are picking fruit and carrying it up and down ladders, so if your alternative is pushing buttons on a cash register, that might be more appealing.” 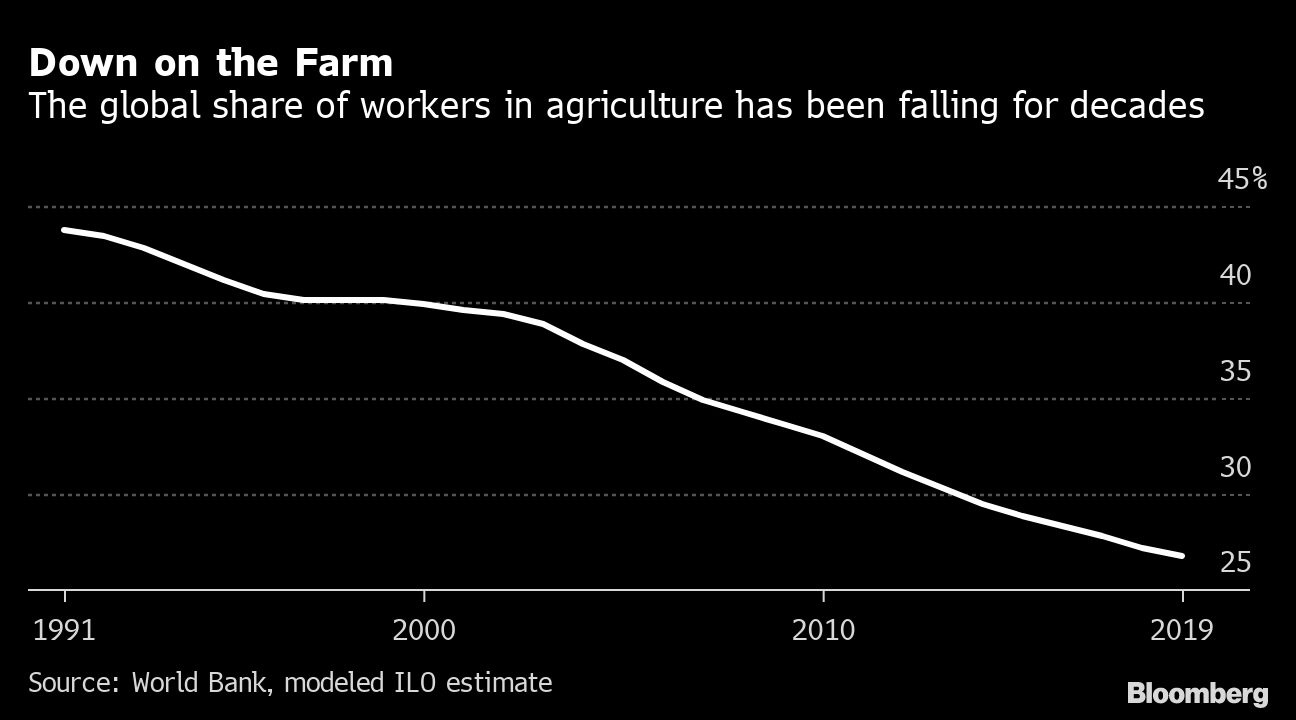 Higher salaries and perks can sweeten the deal. Chipotle Mexican Grill Inc. recently raised U.S. menu prices by as much as 4 per cent after increasing average pay to US$15 an hour; in Canada the company is offering a referral bonus to help with recruitment. Pork-processing workers at Smithfield Foods Inc. in South Dakota get freebies like Apple Watches or iPads once they complete their first 60 days, a company official said. Pizza chain Rossopomodoro, which is headquartered in Europe, has been forced to boost its base pay by 50 per cent in London, CEO Daniele di Martino said.

But often money is not enough. Workers are increasingly demanding greater protection from the coronavirus as well as higher wages, according to Sunny Verghese, CEO of agricultural trading giant Olam International Ltd.

While meatpackers have made significant safety progress since last year, they are up against the delta variant now. That has slowed the amount of cattle moving through slaughterhouses at meat giant Tyson Foods Inc.

“We were on a good trajectory and then the delta variant showed up, and we’ve taken a step back as result of that,” CEO Donnie King said on a call with investors last month. “Essentially it takes six days to get five days’ worth of work.”

Worker shortfalls aren’t happening everywhere, and the effects aren’t evenly distributed. Much of mainland Europe has not felt the same crippling shortages as the U.K., where Brexit constrained the flow of EU workers. China has been largely unaffected and in India, while inflation is still a worry, labor is plentiful and agriculture has been mostly untouched by virus restrictions.

Elsewhere, labor is just one of several headaches for the world’s food ecosystem. Extreme weather from Brazil to France has affected harvests. Surging crop prices have pushed up the price of feeding livestock — and therefore the price of meat. Transport costs have skyrocketed due to soaring demand, container shortages and overwhelmed ports, not helped by the temporary partial closure of China’s Ningbo-Zhoushan, the world’s third-busiest cargo port.

Still, the shortage of workers threatens to further add to costs, whether through wage increases or supply shortfalls. And the issue won’t disappear when the pandemic ends: The share of workers employed in agriculture has been falling for decades amid a shift to cities and services sectors, and hiring for some jobs was tough long before COVID. These more permanent changes to the labor market call for technological solutions, and investment in automation and robotics has accelerated during the pandemic. 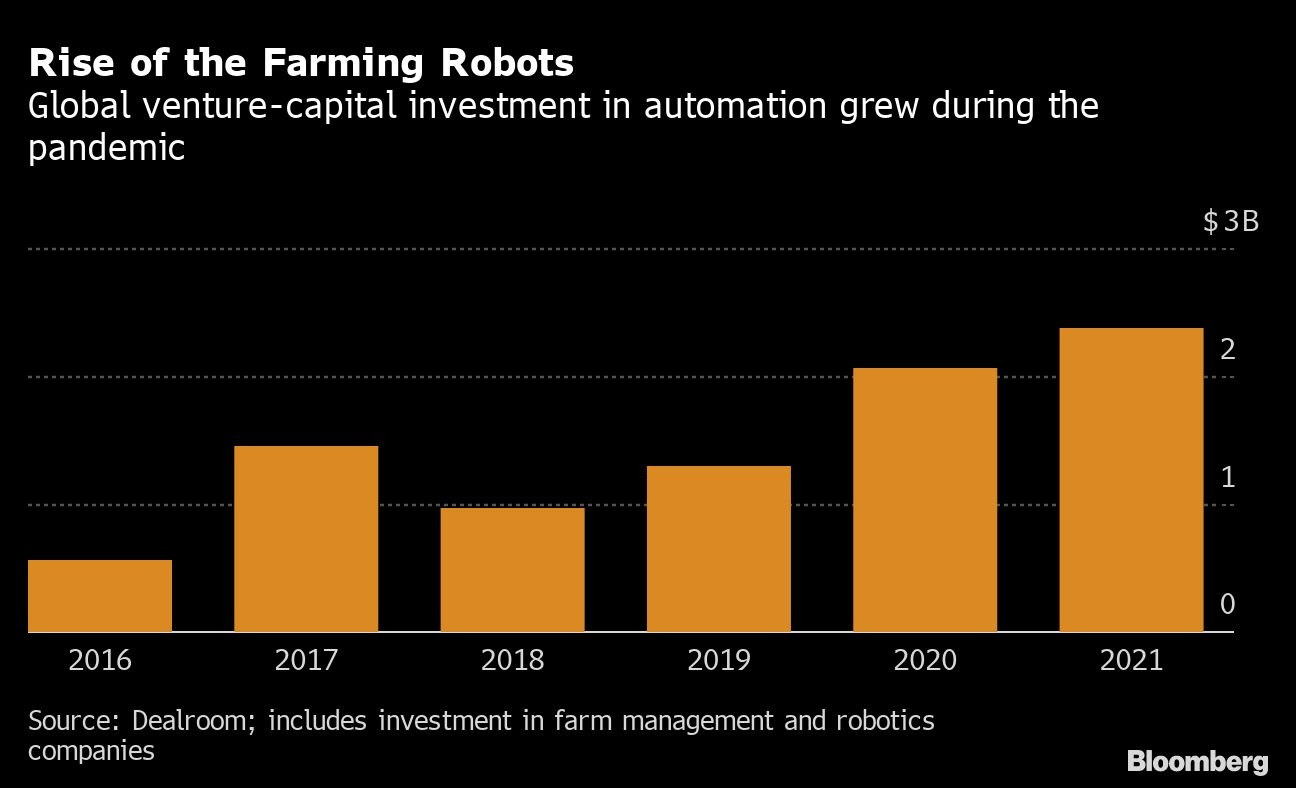 In the U.S., automated tractors, robotic milkers and machines such as carrot planters are replacing human labor. Meanwhile, U.K. farmers are trialling robots to pick strawberries, lettuce or broccoli. Harvesting tools have helped Brazil’s robusta-coffee farmers cut dependence on manual workers to one-fifth of the number needed just a few years ago, according to Edimilson Calegari, general manager at Espirito Santo-based cooperative Cooabriel. While the country’s labor shortfall extended the length of the harvest, he said, technology has lessened its impact.

Still, it will take years before farmers really take to robots, according to Cindy van Rijswick, a senior analyst at Rabobank in Utrecht who specializes in horticulture.

“In the end, prices for food have to go up to compensate workers in a better way and to find solutions,” van Rijswick said. “They just cost money and we need to be willing to pay that.”