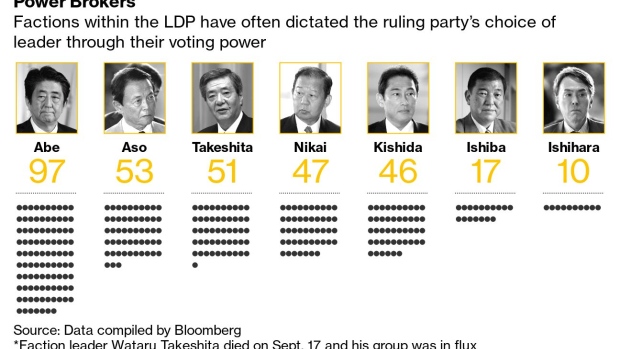 (Bloomberg) -- The four candidates seeking to replace outgoing Japanese Prime Minister Yoshihide Suga begin a series of virtual townhall meetings Thursday, as they look to firm up support before a party leadership election in less than a week.

Votes from rank-and-file Liberal Democratic Party members could be a key factor in the race among Fumio Kishida, Sanae Takaichi, Taro Kono and Seiko Noda. The race is still fairly wide open, as many of the party’s powerful factions haven’t lined up behind a single candidate in the Sept. 29 leadership election.

The LDP vote is evenly divided between the party’s lawmakers and rank-and-file members. The winner is virtually assured of becoming prime minister due to the LDP’s dominance in parliament, which is set to hold a special session on Oct. 4 to elect the new premier.

In its final meeting before the LDP vote, the Bank of Japan on Wednesday left policy unchanged and emphasized the need to keep supporting the economy amid risks from the pandemic. The new ruling party leader is expected to put together a stimulus package to help the economy get back on a firmer recovery track.

Suga is set to head to the U.S. for a White House meeting among the leaders of the Quad nations -- Australia, India, Japan and the U.S., with Tokyo saying its foreign policy will steer the same course led by its American ally when a new leader takes charge.

Six days to Sept. 29 vote: The LDP will hold its election among its lawmakers and rank-and-file members -- with the two groups each having 382 votes. If a candidate does not win a majority of the 764 votes, there will be a runoff between the top two vote-getters.

A poll this week from the Mainichi newspaper said more than 30% of the LDP’s parliamentary lawmakers -- who have 382 votes in total -- appear to support Kishida. Kono is in the mid-20% range. Takaichi is at about 20% and Noda is at less than 10%. Kono is the leading candidate in public polling and expected to pull in the most support from the LDP’s rank and file, which also has 382 votes.

Kishida has his own 46-member faction and can count on it voting as a bloc for him. The biggest faction, which includes former Prime Minister Shinzo Abe, is allowing its nearly 100 members to vote for the candidate of their choice, while Abe has thrown his support behind Takaichi. Kono is a member of the Aso faction, which is set to offer major backing. The Ishiba faction, with 17 members, and the Ishihara faction with 10, are leaning to Kono.