The crisis in the Suez Canal could soon hit your instant coffee.

The vessel blocking passage in one of the world’s most important maritime chokepoints isn’t just curbing shipments of crude oil and liquefied natural gas, but also containers of robusta coffee-- the type used in Nescafe. Europe is most affected as it imports through the Suez, but the impact will be felt globally as shipping delays exacerbate a shortage of containers that upended food markets.

The massive container ship Ever Given became jammed in the key trade route on Tuesday, blocking passage for ships hauling almost US$10 billion of goods through the Egyptian waterway. Dislodging the 200,000-ton vessel could take days or even weeks, and a logjam around the canal has already doubled.

“For traders, they are going to scramble to supply their clients in Europe,” said Jan Luhmann, founder of JL Coffee Consulting and a former head coffee buyer at Jacobs Douwe Egberts BV, one of the world’s largest coffee roasters. “Resolving this is going to take a few days if we are lucky, but even so, a lot of damage has already been done.”

About 12 per cent of global trade goes through the Suez, and the waterway is more known for its role in energy markets than agricultural commodities like coffee. Still, only two major robusta coffee producers -- Brazil and Ivory Coast -- don’t use this key route to reach major consumers in Europe.

Concern about the disruption is supplies sent robusta futures traded in London rallying as much as 2.8 per cent, rebounding from a two-week low. The price gap between coffee for May delivery and beans for July surged more than 30 per cent earlier Friday. Volcafe, the coffee unit of trader ED&F Man, said the Suez incident “risks sending an already tight container freight market even tighter.”

Coffee roasters on the continent had already been struggling to get supplies from Vietnam, the world’s largest robusta producer, due to the container shortage. Just when availability began to improve, the canal blockage brought another headache. All of the beans Europe imports from East Africa and Asia flow through the Suez.

“Can roasters support two to three weeks of delays? Probably not,” said Raphaelle Hemmerlin, head of logistics at Swiss coffee trader Sucafina SA. “I don’t think they have the buffer stock that they normally have.” 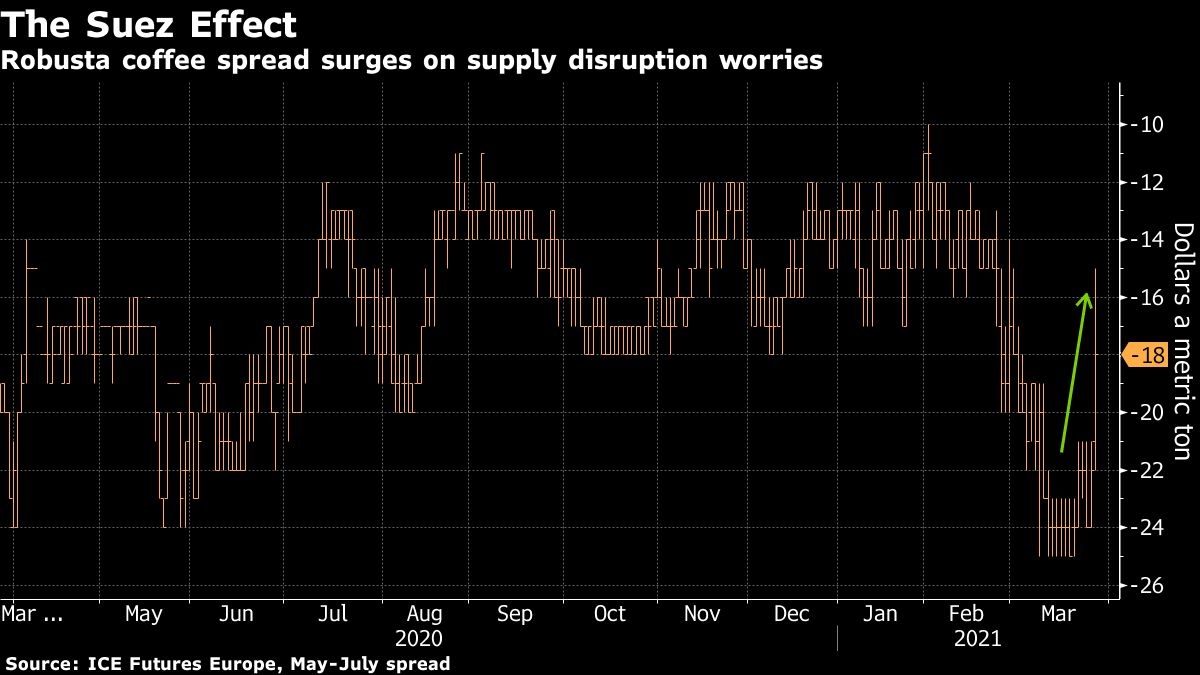 What’s more, the disruption will have a global impact as it holds back containers, exacerbating the global shortage that’s already pushed U.S. inventories to a six year-low. Boxes will not only be stuck at ships in the canal, but when traffic clears up, they will back up at ports like Antwerp and Rotterdam, said Hans Hendriksen, who has traded cocoa and coffee for 40 years.

“Logistics will be disturbed more the longer it takes to solve the problem,” said Hendriksen, who now advises exporters as well as small- and medium-sized traders.

Unlike roasters in the U.S., Europe’s coffee makers can’t as easily use robusta from Brazil due to the taste of their products. As a result, some roasters on the continent recently turned to East Africa to bridge the shortfall of beans from Vietnam, buying up supplies from places like Uganda or milder-tasting arabica beans from the region.

But those beans also travel via the Suez. Traders who have them stored in European warehouses are charging a hefty premium in the physical market. At the peak of the container squeeze, traders were demanding US$450 a metric ton above the exchange price for Vietnamese coffee held in Europe, three times the normal rate.

“Inventory in Europe is very tight and I expect the spot market will be on fire,” JL Coffee Consulting’s Luhmann said. “Inventory in Vietnam is comfortable, but what’s the value of that if you can’t get it to Europe?”

Brazil has so far benefited from price dislocations caused by the container shortage that first hit Vietnam at the end of last year. The No. 2 robusta producer exported a record 4.9 million bags in 2020, a 24 per cent increase from a year earlier, according to industry group Cecafe.

Still, most of those beans ended up in exchange-certified stockpiles instead of with roasters. That’s because replacing Vietnamese coffee with Brazilian beans would change the taste of the final product for consumers. East African beans are a better replacement.

“Will roasters change their recipes?” Sucafina’s Hemmerlin said. “It’s not so simple.”

Container lines A.P. Moller-Maersk A/S and Hapag-Lloyd AG said they are considering sending ships around Africa to avoid the Suez gridlock, while Torm A/S, a Danish owner of tankers, said its clients have asked about the cost of options to divert. Even if that happens, it would still take time to clear a queue of vessels.

“If this lasts another day or two, that will mean about a week of delay, so there won’t be much of an impact,” Hemmerlin said. “Beyond that, with the freight issues we already have out of Asia, freight prices will increase further.”

“For me, it’s just adding more problems to the whole supply chain,” she said.