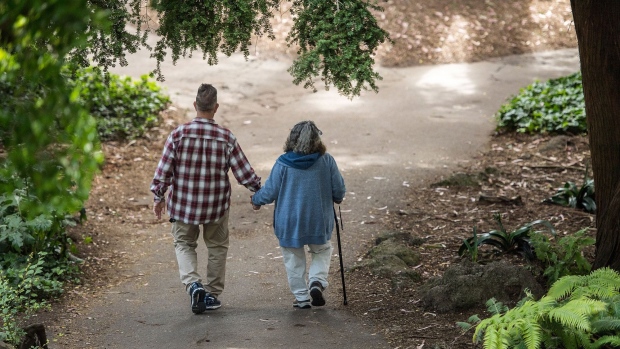 An elderly couple holds hands while walking on a path at Golden Gate Park in San Francisco, California, U.S., on Thursday, June 21, 2018. , Bloomberg

After leaving more than 30 million Americans unemployed, the Covid-19 crisis is now throwing a big wrench in people’s retirement planning. Even before the pandemic, millennials and Gen Xers had been struggling to save for retirement. Now there’s a risk it will become even less of a priority.

But putting money away for retirement is still important, even when money feels tight. By taking advantage of compounded growth, small initial amounts can turn into sizable portfolios you can rely on later. Certain retirement accounts can also offer what amount to tax breaks, which can help you start or maintain your savings without draining cash.

For example, one of the most common questions I get asked as a financial advisor is whether to use a Roth or a traditional IRA. The decision essentially boils down to whether you want to pay taxes upfront or down the road.

Choosing a retirement account that allows you to receive tax-free income, after decades of tax-deferred compounded growth, seems like the right thing to do. But especially during a pandemic with more uncertainty ahead, the decision should be based on your present-day cash-flow situation and whether you have enough emergency reserves to draw on if you suddenly lost your job. Here’s what to consider:

Are you financially secure? If you are earning above and beyond what you spend and are able to consistently save, then Roth accounts make more sense than traditional IRAs. You have enough funds to pay those taxes now and avoid them in retirement.

But if you are one of the millions of Americans who can only save modest amounts, if at all, then getting a tax break now by saving in a traditional IRA is likely more appropriate.

Are you in a high or low tax bracket? The main argument against saving in Roth accounts centers on the notion that people will shift to lower tax brackets in retirement anyway, since they are not “earning” as much money.

In reality, affluent retirees receive unearned income in the form of pensions, social security benefits and income from interest and dividends, which usually keeps their tax rates similar to their pre-retirement years. Thus, high income earners should generally save in Roth accounts if they can afford to pay taxes now. If the pandemic has changed one’s current cash flow, however, you can always save in a traditional IRA first and convert to Roth when things are more prosperous.

Are you eligible for a Roth? There are some tricky rules around eligibility that ultimately make it so poorer people can’t afford to save in a Roth, whereas richer people are prevented from doing so. But there are loopholes, and people take advantage of them.

For 2020, single tax-filers with a modified adjusted gross income of more than US$139,000 (US$206,000 if married and filing jointly) cannot contribute to a Roth IRA. But they can still contribute to their pre-tax IRAs. Meanwhile, single tax-filers with an active 401(k) at work and modified adjusted gross income of US$75,000 or more cannot deduct their IRA contributions. The income limit is US$124,000 or more for married couples with either spouse covered by a workplace plan.

In both of these cases, workers should contribute to their IRAs after tax (so future distributions are free of income tax) and then immediately convert this to a Roth IRA to avoid Required Minimum Distributions when they reach 72.5 years of age. This is often referred to as a “back door” Roth IRA contribution — an obvious and legal tax loophole that has been blessed by the IRS.

The potential impact of choosing between pre-tax or after-tax retirement accounts is even more significant with 401(k) and Roth 401(k) plans, since contribution limits are more than triple those of IRA limits, and therefore so is the amount that you can deduct from your income and tax burden.(3) According to Plan Sponsors Council of America, 70% of employer plans now offer a Roth 401(k) option. Whether or not you want to contribute the maximum to a Roth 401(k) again depends on your cash flow and how much you want to spend on taxes now.

When do you hope to withdraw? The U.S. Internal Revenue Service mandates that you withdraw a minimum amount from traditional IRA accounts every year after turning 72.5. These Required Minimum Distributions or RMDs allow the government to finally collect that income tax after years of deferred growth. There are no RMDs with Roth accounts. And RMDs have been suspended for 2020 as part of the CARES Act stimulus package.

For most ordinary taxpayers, this is not an issue. If IRA distributions are their primary source of income, people will withdraw funds to cover their expenses. But for those who do not need to tap their IRAs, failing to withdraw is costly: The IRS slaps a 50 per cent penalty on any portion of the RMD not withdrawn. So anyone fortunate enough to have other sources of income may want to keep funds in a Roth IRA for a few more decades and then pass it on to the next generation.(2)

The Covid crisis should serve as a reminder that saving money, whether for retirement or an emergency fund, helps prepare us for events that are outside of our control. Contributing to traditional IRAs and 401(k) plans are a smart, tax-efficient way to start.

(1) Both accounts enjoy tax-free growth within these accounts – i.e. no tax on capital gains, dividends or interest from investments. And American workers with earned income can save up to US$6,000 (or US$7,000 if they are 50 or older) in traditional or Roth IRAs.

(3) Inherited Roth IRA distributions are subject to RMDs, however.

Anora Gaudiano is a senior adviser associate at Wealthspire Advisors. Before joining Wealthspire, she spent more than a decade writing about markets and investing for the Financial Times, MarketWatch and Bankrate.