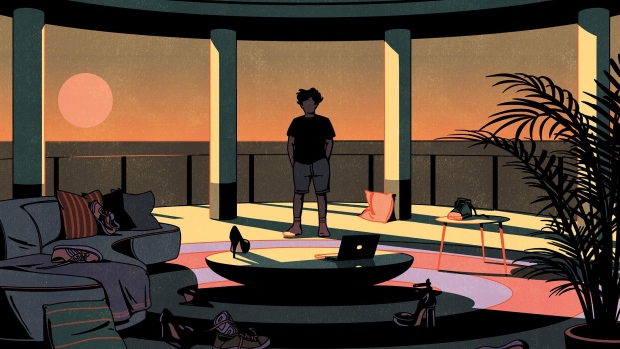 Life in the Bahamas , Illustration: Maxime Mouysset for Bloomberg Businessweek

(Bloomberg) -- “It’s been an interesting few weeks,” said Sam Bankman-Fried. No kidding. From SBF’s own account of what went wrong in his crypto empire, to the nervous weekend ahead in China, your Saturday reading is about communication.

Lounging in his $30 million Bahamas penthouse, SBF opens up about what really went wrong at his collapsed cryptocurrency exchange FTX (“a few, very large, boneheaded decisions”), how much he reckons he used to be worth ($100 billion) and what he thinks happened to the $8 billion that went missing from the accounts.

A failure to recognize the extent of the problem was also behind the sudden outpouring of anger in China over botched Covid measures and lack of clarity. As China braces for what could be an uneasy weekend, with police out in force and protesters wary of a crackdown on any public demonstrations, its citizens have found a new underground network to communicate their frustration and anger.

But what if the person you need to persuade is yourself? We asked Elton John, Bill Ackman, Dina Powell McCormick and 15 other leading philanthropists what advice they would give their younger selves. Dear 18-year-old me, here’s how to change the world.

While the Bahamas may attract billionaires and crypto klutzes, Thailand’s tourism mecca of Phuket is seeing a surge in visitors from a different quarter: Russians. With their military killing thousands in Ukraine, Russian tourists are using overseas credit cards and chartered planes to circumvent the effect of sanctions and head out on holiday.

For millions of workers around the world the problem is communicating their desire for higher wages and better conditions in the face of soaring food and living costs. That face-off is increasingly ending in strikes, with South Korea being a prime example in Asia of the growing discontent. Labor strife deepened this week with a nationwide strike by truck drivers costing at least $1.2 billion in supply disruptions in everything from steel to autos and oil. Here’s  what that means for the global supply chain.

The Bahamas is also not the only place with aspirations to become a new financial hub. India’s latest effort is rising from scrubland once dominated by marsh birds and grazing buffalo. Known by the acronym GIFT City, the lonely cluster of glass-fronted towers housing 20,000 employees of companies such as JPMorgan Chase and HSBC Holdings is the latest effort to claw back the billions of India-centric trading that moved to Dubai, Mauritius or Singapore.

For governments, communicating your economic strategy to the markets is key, as the previous UK administration discovered. It helps to have a good finance chief. But what if you’ve just taken power and aren’t sure who would be the best candidate? One way is to appoint yourself.

And finally, you know markets are nervous when even real estate prices in the metaverse are falling. Listen to the podcast about who’s still investing in virtual penthouses.

Have an agreeable weekend.