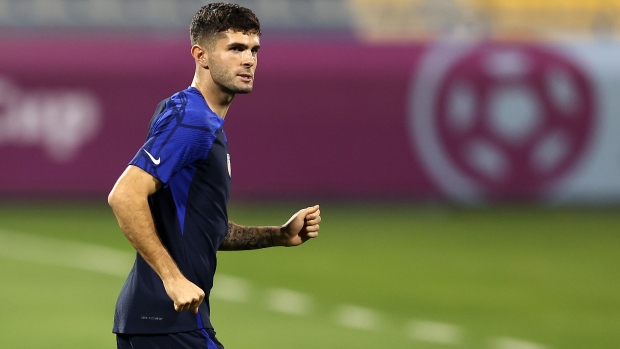 Christian Pulisic of United States trains ahead of their Round of Sixteen match against Netherlands. Photographer: Christopher Lee/Getty Images Europe , Getty Images via Bloomberg

(Bloomberg) -- Hello and welcome to the weekend.Thanksgiving holiday madness is over and there’s still time before the Christmas rush overtakes your life. Why not treat yourself to a spontaneous road trip this weekend? Gas prices have fallen to their lowest level since February, and the auto club AAA says the national average now sets you back around $3.55 per gallon. Hurricane season officially ended Wednesday so feel free to drive South.

You can also stay home and watch what the rest of the world calls football. The US takes on the Netherlands this morning, while Argentina battles Australia later in the day.  Toast America’s soccer victory or mourn its loss with a shot of bourbon made by veterans —  some of the proceeds go to charities that support our men and women in uniform. If lounging on the couch suits your mood today (with or without bourbon), check out our guide to the best 151 movies and shows to stream.

How are you feeling about crypto these days? Sam Bankman-Fried opens up about what really went wrong at his collapsed cryptocurrency exchange FTX (“a few, very large, boneheaded decisions”), how much he reckons he used to be worth ($100 billion) and what he thinks happened to the $8 billion that went missing from the accounts. Diehard Bitcoin fans may want to prepare for more pain after last month’s 16% rout. Over the past decade, the largest token went on to have a weak December following declines in November, according to data compiled by Bloomberg.Your trusty savings account will get a boost if the Fed, pushed by the red hot labor market, raises interest rates further at its Dec 13-14 meeting. On the flipside though is higher mortgage rates. Home prices in 75 cities that used to rank better than the national average for affordability are now worse than average. A median-income household would have to spend its entire paycheck to purchase a median-priced home in Key West, Florida, leaving no money for anything else. Did you know Kim Kardashian has a private equity firm?  Well, she does and it’s expanding. Skky Partners just hired David Brisske from  investment firm Permira as a managing director. Co-founder Jay Sammons says they intend to hire more investment professionals “soon.’’

If you’re wondering what to do with your own money next year, Bloomberg Intelligence analysts discuss their 2023 investment outlook for stocks in this podcast. Spoiler alert: Small caps look cheap.

Enjoy the rest of your Saturday. We’ll be back tomorrow with a look-ahead to the coming week.