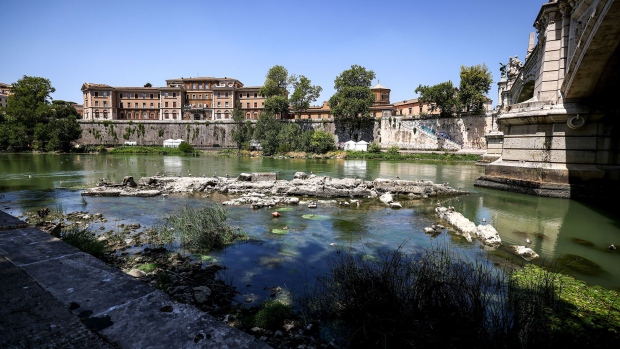 (Bloomberg) -- Well, hello there. We’ve some great stories again for you to delve into this weekend, and a revealing podcast to get you thinking.

Sorry, but recession warnings are everywhere—a Bloomberg survey of economists now puts the odds of a contraction at a simple toss-up. Inflation remains high, Russia’s war with Ukraine is snarling supply chains and boosting the cost of raw materials, while a slowdown in China is sowing worry about the future of global growth. Normally that would be enough for stock investors to head for the hills, but not in this market for masochists. One possible reason for the extraordinarily high pain threshold is Apple. It’s just beaten the S&P 500 for a ninth straight week. Today’s test for you: How much has the gauge clawed back since its January peak and June nadir?

Speaking of low points, Donald Trump isn’t having a very good week. The raid on Mar-a-Lago yielded a treasure trove of documents, including a box with the kind of “top secret” information that’s normally only read in a protected room by people with high-level security clearances, unsealed filings show.  The fallout promises to keep a focus on Trump rather than inflation and other issues Republicans want to use against Democrats in the runup to US midterm elections.

Our commodities reporters show how, with the planet in the grip of a climate crisis, it’s never been a better time to make money digging up coal. And you can add the world’s oldest glass maker (founded 1756) to the list of companies making contingency plans should Russian President Vladimir Putin turn off the gas taps this winter.

Extreme weather is also disrupting daily life. In Europe, drought is set to drive prices for basic foodstuffs like meat, milk and cheese even higher, while the Rhine River is so low it’s no longer worth some barges transporting their loads into and out of central Europe. In California, the water crisis is putting the squeeze on tomato production—part of the reason why the cost of your spaghetti sauce is going up.

Bloomberg Green asked experts from across the climateverse to take part in a thought exercise:  Imagine it’s 2030. What aspect of the American future wouldn’t have been possible without Joe Biden’s Inflation Reduction Act? Here are their eight predictions.

Without wishing for one moment to detract from the misery caused by climate change, heatwaves have thrown up some weird and dark surprises as waters and glaciers retreated. Among the revelations: Corpses, ghost villages and even a glimpse into life under one of Ancient Rome’s more debauched rulers (go on, have a guess).

And lastly, Carly Wanna reports why cruise lines keep canceling trips and why their on-board pizzerias won’t be open 24/7. Turns out that people don’t want really want to work on any of the seven seas these days, thank you very much.

Actually, while we’re talking all-day pizza, weighing more is bad for you, right? But what if the dangers of being heavy have been overstated, or misrepresented? The new episode of the Bloomberg podcast “Losing It” investigates. It’s a timely analysis, given that a UK study just revealed that women who follow a vegetarian diet are at a higher risk of suffering hip fractures later in life. All in all, diet advice and orthodoxies are subject to endless revision.

Enjoy the rest of your Saturday, and we’ll be back tomorrow with a look-ahead to the coming week.