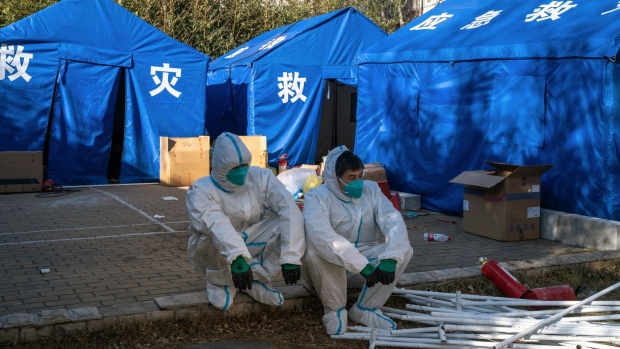 Workers in protective gear at a temporary shelter outside a neighborhood placed under lockdown due to Covid in Beijing, China, on Thursday, Dec. 1, 2022. The Chinese capital of Beijing reported 5,006 cases for Wednesday, a record, as it struggles to contain the worst ever outbreak to hit the country’s political and cultural center amid public anger at the punishing Covid Zero regime. , Bloomberg

(Bloomberg) -- After years of harsh measures to contain Covid, the Chinese government is moving away from restrictions that pushed residents over the brink. Protests may be over for now in China, but truckers in South Korea are not ready to give up just yet, setting the stage for more turmoil in global supply chains. Watching World Cup football may not fully be a reprieve, what with spectacular upsets (or wins, depending on how you look at it). Here are the stories to set you up for the week.

The big shift: As China’s easing of Covid measures starts to take shape, investor focus is seen shifting from frenzied stock bets on airlines and catering to longer-term plays such as consumer and health-care shares, with some betting on a full reopening by March.

The big slump: Still, China’s numbers due in the week ahead will be ugly, highlighting the damage done to the economy from Covid restrictions and weak external demand. Trade data will probably show imports and exports falling, consumer price inflation withering, and factory-gate prices slipping deeper into deflation. Credit should rebound, but only due to a seasonal bump.

The big purge: Japan’s football team once again stunned the World Cup with a victory over Spain. Now they join the knockout stage against Croatia as the global sports spectacular culls another eight teams in four days. The US exited the World Cup in the round of 16, losing to the Netherlands on Saturday.

The big meeting: The Organization of Petroleum Exporting Countries and its partners are expected to hold production targets steady at their meeting today, despite data showing that Russia has been undermining the previous agreement to cut output. Oil analysts say the group faces too much uncertainty — including China’s demand outlook and a looming EU price cap on Russian crude exports — to change course now.

The big divide: Voters in the US state of Georgia head back to the polls in a vote that will decide whether Democrats will have a 51-49 edge in the Senate or the house will be evenly split.

The big ease: Central banks in Australia and India could deliver 25-basis-point rate hikes, underlining a slowdown in the current tightening cycle.

The Big Take: We tap into the dark side of TikTok, and investigate the deaths of at least 20 children in the past 18 months linked to the infamous “blackout challenge” on the social media platform.

And finally, with so many now rekt in the Crypto winter, and others just hodling on, telling fellow investors WAGMI, here’s a Quicktake guide to avoiding McDonald’s in the crypto winter.

Have a resurgent week.