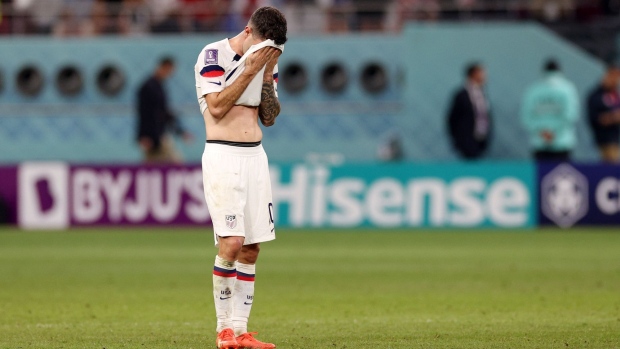 The big vote: Nearly a month after the midterm elections, voters will finally decide between Democrat Raphael Warnock or his Republican opponent Herschel Walker in Georgia’s Senate runoff on Tuesday. Both parties have spent millions ahead of the race, whose results will either bolster the narrow Democratic majority in the Senate, or keep it at the 50-50 tie it’s been since Joe Biden took office.

The big market thought: The Fed enters a blackout period this week before its last interest rate decision of the year, but investors have plenty of opinions on the future path for policy makers. Lawrence Summers, for one, warns that Friday’s jobs report — showing an unexpected jump in wages — indicates interest rates need to rise more than markets are currently expecting. Another strategist, Vincent Deluard of StoneX Financial, argues the Fed should just accept that a decade of 5% inflation is the least painful way to deleverage the economy.

The big ease: After years of harsh measures to contain Covid, the Chinese government is moving away from restrictions that pushed residents over the brink. Shanghai on Sunday said it was dropping some requirements, joining other top-tier cities in easing curbs after thousands of demonstrators took to the streets last weekend. While markets have already rallied in anticipation of the reopening, here’s how some investors are positioning themselves for a full recovery.

The big meeting: OPEC and its partners held production targets steady at their meeting today,  a move that reflects the unpredictability of supply and demand in the coming months. The decision was widely anticipated and markets will be looking ahead to how prices respond as EU sanctions on Russian crude exports kick in Monday, as well as China’s tentative steps in easing Covid measures.

The big opinion: Niall Ferguson considers last week’s extraordinary protests in China and popular protests have played a revolutionary role on more than one occasion in the country’s history.

The big knockout: The US has once again exited the World Cup in the round of 16, losing to the Netherlands on Saturday. The Americans will hope to do better in four years, when the tournament takes place in the US, Mexico and Canada. For now, matches over the next three days will decide which countries proceed on to the quarterfinals.

ICYM our Big Take: At least 20 children have died in incidents linked to to the viral “blackout challenge” on TikTok. Olivia Carville talks to some of the bereaved families and asks, why isn’t the world’s most popular app doing more to protect them?

And finally,  with so many now rekt in the Crypto winter, and others just hodling on, telling fellow investors WAGMI, here’s a Quicktake guide to avoiding McDonalds in the crypto winter.

Have a good week. We’ll see you on the other side.