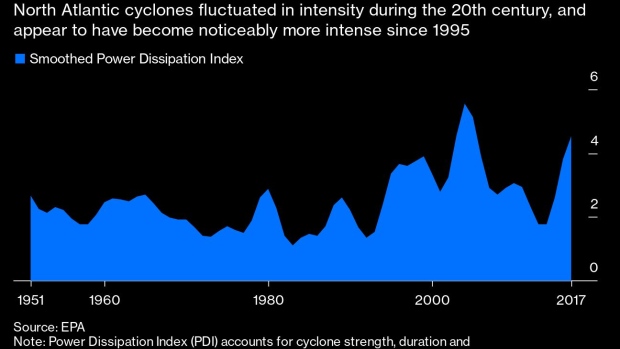 Damaged docks and homes following Hurricane Ian in Matlacha Isles, Florida, US, on Saturday, Oct. 1, 2022. Research firm Enki Holdings LLC pegs the economic cost of Hurricane Ian at $60 billion to $70 billion, based on damage to homes and infrastructure, as well as the cost of reconstruction and longer-term knock-on effects including the disruption in tourism. , Bloomberg

Here’s a few stories to help get you prepped for what's sure to be another busy week.

The big recovery: Ian may no longer be a massive storm, but it leaves behind an estimated $70-$120 billion in economic damage — as well as countless untold human tragedy. While that makes Ian one of the top-10 costliest storms in the US, the fact that it skirted a key fertilizer-production area means the broader economy was spared the worst.

The big stat: The jobs report due Friday is projected to show a labor market at cruising speed, a reading that’s likely to keep the Fed pumping hard on the monetary-policy breaks. In addition, figures on August job openings and September surveys of manufacturing and services will be released.

The big market thought: With investor sentiment in the gutter and the Bank of England vowing to open the checkbook to prop up its bond market, could another equities bear-market rally be in the cards? Julian Emanuel certainly thinks so.

The big gathering: OPEC+ will hold its first in-person meeting since March 2020 as the cartel weighs cutting oil production to stem a recent slump in prices. The unexpected IRL gathering could indicate a bigger output cut is coming. Another unknown: whether Russia, a hefty part of the “plus” in OPEC+, will send anyone.

The big vote: Brazilians could soon have a new president. Former leader Luiz Inácio Lula da Silva has consistently led his rival, incumbent Jair Bolsonaro and polls on the eve of the vote show Lula potentially gaining the 50% support needed to avoid a runoff. Join Bloomberg on Sunday afternoon, where we’ll be covering the election results in real time. And for anyone looking to profit from the results, here’s a handy guide on where to place your first trades.

The big earnings: After CarMax’s big earnings miss dragged its stock down by 25% last Thursday, Levis and Constellation Brands, owner of the Corona and Modelo beer brands, will be in focus this week. Retailers have had a rough quarter (or two), and the inventory glut may only be getting worse, writes Olivia Rockeman. But at least shoppers will be getting better deals.

The big opinion: Ian’s rapid intensification demonstrated a worrying trend, writes Lara Williams. Its wind speed more than doubled in just 48 hours to 155mph, as warm water, moist air and low wind shear gave the storm more energy and destructive power. As the planet gets warmer and wetter, such conditions will become commonplace.

ICYM our Big Take: The UK’s financial turmoil may be coming to a head but it’s really a crisis that was years in the making, according to Philip Aldrick, Libby Cherry and David Goodman. And unless the Truss government does something to restore its credibility with investors, homeowners and businesses will likely have to pay the price.

And finally, want to get better at convincing people to do your bidding? Journalist and author David McRaney explains the science behind persuasion on the Masters in Business podcast.

Have a good week. See you on the other side.