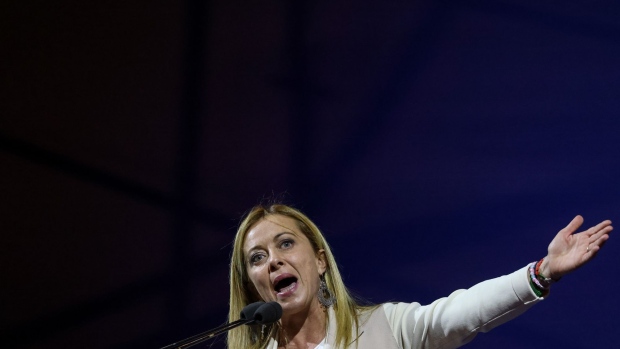 Prime Minister Liz Truss’s Conservative government is unleashing a radical new economic direction for the UK as it deals with  soaring inflation, strikes and fears of a spiraling government debt burden. Her proposed tax cuts and borrowing that will cost £161 billion over the next five years have landed like a lead zeppelin on the markets, with the pound dropping to a 37-year low last week. Bank of England Governor Andrew Bailey is under increased pressure to get more aggressive about boosting rates to shore up sterling with many seeing the UK currency going to parity against the dollar. Chancellor of the Exchequer Kwasi Kwarteng said there’s “more to come” after the biggest fiscal giveaway in half a century.

This week, Labour Leader Kier Starmer gets to deliver a national rebuttal in his keynote speech at the party's annual conference in Liverpool. He’s likely to present Labour as the fiscally responsible party versus the profligate Conservatives — a reversal of the stereotypes of old — as he works to make Truss a prime minister with a very short term. Starmer said Sunday he would  reinstate the top 45% rate of income tax if Labour wins power, but keep the cut to 19% in the basic rate.

The big open:  All eyes will be on the opening bell after Friday’s rout. The pound crashed below $1.11 for the first time since 1985 and closed at $1.08. Borrowing costs on five-year government bonds jumped the most for a single day on record as traders dumped UK assets. Chancellor of the Exchequer Kwasi Kwarteng seemed unconcerned. “Markets move all the time,” he told the Financial Times “It’s very important to keep calm and focus on the longer-term strategy.”The big winners:  Wealthy men living in London and the south of England stand to gain the most from the sweeping tax cuts, data indicate. Kwarteng’s plan has been slammed as “socially divisive” and increasing the gap between rich and poor. Someone earning £200,000 will gain £5,220 a year, rising to £55,220 for a person earning £1 million, while someone earning £20,000 will get just £157, according to the Resolution Foundation.

The big election:  Giorgia Meloni looks set to be not just Italy’s first female prime minister but its first from the far right. So far, investors don’t seem that bothered by a right-wing coalition led by her Brothers of Italy party. But many fear that calm may not last.

The big  thought:  Week by week, the bond-market crash just keeps getting worse and there’s no clear end in sight. With central banks worldwide aggressively ratcheting up interest rates in the face of stubbornly high inflation, prices are tumbling as traders race to catch up. And with that has come a grim parade of superlatives on how bad it has become.

The big opinion: The outpouring of national affection after the death of Queen Elizabeth II underscored how much her dignified presence helped an anachronistic institution put off a long-overdue reckoning, Pankaj Mishra writes in Bloomberg Opinion. The new King Charles III is rumored to be keen on reforms already implemented by royals in Spain and other European countries.

The big breach: A 17-year-old was charged with computer misuse and breaches of bail, according to City of London Police. Few other details are known. Hackers have recently targeted Uber Technologies, infiltrating the company’s network and sending messages to employees. The company later blamed a notorious extortion group called Lapsus$ for that incident.

The big chill:  An Arctic blast that’s blowing across western Europe through the week will be an early test of how willing people are to delay switching on the heating in a bid to save energy and ease household budgets. Temperatures in London will be almost 5 degrees Celsius below average, according to forecaster Maxar Technologies.

ICYM our Big Take: Nowhere is the impact of China’s Covid Zero policy more obvious than in the city of Ruili, on the border with Myanmar. Its quarter million residents have endured seven lockdowns and were forbidden to leave their homes for a total of 119 days. But there have been few deaths, and no recorded cases for six months, as the economy contracted 15%. Lockdowns looks less like a health measure these days, some experts say, than an opportunity for the state bureaucracy simply to enforce its will.

The big sip:  Despite this year’s numerous weather disasters, Europe and the US still managed to to make some stunning wines, writes Bloomberg’s  wine critic, Elin McCoy. Wine growers are trying to adapt to climate change, and every year is a reminder that at harvest, “everything can change overnight,” writes McCoy. You can read all about how regions in Europe and the US fared in our 2022 harvest report.

And finally,  George Patterson, chief investment officer of PGIM Quantitative Solutions, says there are still “a lot of opportunities for commodities” as stocks and bonds continue to take a beating amid the Fed’s rate hikes and lowered outlook for growth. “Our view is that the Fed is going to be successful in taming inflation, but it’s also going to take a little bit of time,” Patterson said in the latest episode of the “What Goes Up” podcast.

Good luck this week. See you on the other side.