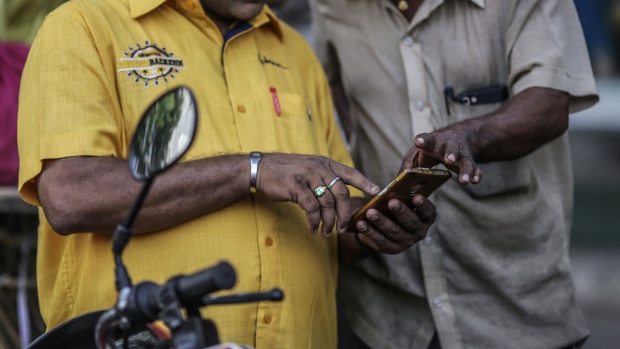 People use a smartphone in Mumbai, India, on Friday, March 28, 2019. Based on the early tallies, as many as 60 percent of India’s 900 million eligible voters are expected to cast ballots between now and May 19, as the center-left Congress Party tries to seize power from the right-wing Bharatiya Janata Party. As in other elections around the world, paid hacks and party zealots are churning out propaganda on Facebook Inc. and the company's WhatsApp messenger, along with Twitter, YouTube, TikTok, and other ubiquitous communication channels. , Bloomberg

(Bloomberg) -- YouTube has signed up more than 800,000 subscribers for its paid services in India since debuting in March, according to people familiar with the matter, vaulting it past competitors in one of the world’s fastest-growing media markets.

The services are growing faster than rival paid music offerings in India, including Spotify and local players Gaana and JioSaavn, according to the people, who asked not to be identified because the subscriber data hasn’t been released. The one paid service that could have more users than YouTube is Apple Music, which has been tight-lipped about its subscriber figures.

YouTube has long struggled to to gets users to pay for its services, especially since the company’s main website is synonymous with free videos. But the Google division has started to gain traction, and the numbers out of India suggest it’s having particular success in the world’s second-most-populous country.

YouTube sells two paid services in India: YouTube Music Premium and YouTube Premium. The music service offers a library of songs on-demand, much like Spotify, as well as the ability to download tracks, listen to music without ads and play tunes while using other apps. YouTube Premium offers the traditional YouTube video service without ads -- and the ability to play clips offline. But music is the driving force behind YouTube’s appeal, especially in India.

The country has emerged as a battleground for online music services, which are eager to sign up users in a country with more than 1.3 billion people. Unlike China, where online media services are tightly controlled by the government, India offers a similarly massive population without the same level of regulation.

Western companies such as Apple Music, Spotify and YouTube compete with local services, and will soon contend with Resso, a platform from Chinese tech giant ByteDance.

ByteDance is testing Resso in India and Indonesia before rolling out a paid version of the app next year. ByteDance’s short-form video app TikTok has more than 200 million users in India, enough to be a real challenger to YouTube and Instagram.

But YouTube already has a big presence in India, giving it an edge as it tries to get subscribers to pay fees. More than 265 million people use the free YouTube service in the country, making it YouTube’s largest market. India is also home to the channel with the most subscribers, T-Series, the country’s largest record label. Google has plowed resources into India in its bid to find new internet users and markets.

The growth is also notable because India isn’t typically hospitable to paid services. The country is one of the poorer major economies, making its average citizen very sensitive to price. The leading free music services, Gaana and JioSaavn, have tens of millions of users, but few paying subscribers.

Netflix Inc., the world’s most popular paid online video service, has had to cut its price to compete in the country. It introduced a cheaper, mobile-only plan in India earlier this year and said this week it’s testing other pricing models.

YouTube has convinced people to pay by selling its service at a low price -- less than $2 a month -- and offering special features to subscribers. People who want to listen to music while not actively using the app -- a popular feature known as background listening -- must pay for it. The other apps offer background listening for free.

Spotify has said that its Indian service has outperformed its expectations so far, though most of its growth has been from users of its free service.

--With assistance from Ragini Saxena.

To contact the editors responsible for this story: Nick Turner at nturner7@bloomberg.net, Dave McCombs