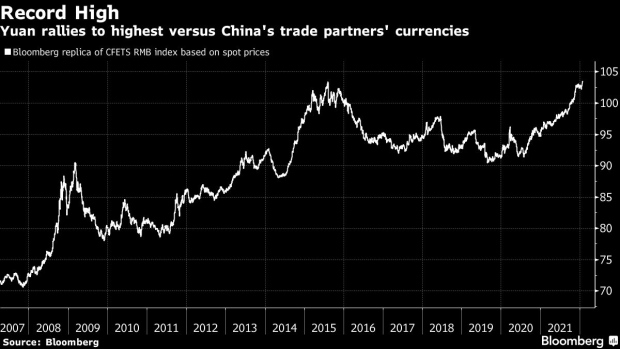 (Bloomberg) -- The onshore yuan rose to an all-time high versus the currencies of China’s major trading partners, in another sign that the authorities are easing their grip on the exchange rate.

Bloomberg’s real-time replica of the CFETS yuan index climbed to 103.47 on Monday, the highest ever in data compiled by Bloomberg going back to 2007. It traded around 103.38 on Tuesday.

The yuan has charged ahead even as China’s monetary easing narrows its yield advantage over the U.S. A hefty trade surplus and strong seasonal demand for the currency are fueling the gains, and the authorities have indicated they won’t stand in the way of an advance.

“The authorities have been more tolerant of yuan strength than we expected, but we still see this as being seasonal demand driven ahead of the Lunar New Year and the gains can retrace after that,” said Eddie Cheung, a senior emerging-markets strategist at Credit Agricole CIB in Hong Kong.

The onshore yuan rose to 6.3238 per dollar on Monday, the strongest since April 2018. China’s currency tends to get a boost at this time of the year when exporters’ dollar sales intensify ahead of the Spring Festival holiday.

The PBOC has shown little discomfort with the yuan’s strength and set the currency’s daily fixing rate at the strongest level since 2018 this week. The fixing limits the onshore yuan’s moves by 2% on either side.

Earlier this month, People’s Bank of China Deputy Governor Liu Guoqiang said the authorities will aim to keep the exchange rate stable, and market and policy factors will help correct any short-term deviation from its equilibrium level.