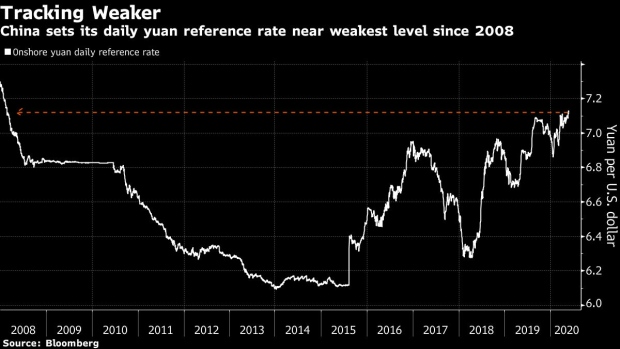 Genuine bundles of Chinese one-hundred yuan banknotes are arranged for a photograph at the Counterfeit Notes Response Center of KEB Hana Bank in Seoul, South Korea, on Monday, Aug. 14, 2017. China's factory output and investment slowed somewhat in July, according to data released today, yet the yuan appeared not to take the data as negative, if in fact it's paying attention to it at all. Photographer: SeongJoon Cho/Bloomberg , Bloomberg

(Bloomberg) -- China’s currency weakened, extending a slide that’s made it one of the worst performers in the world in the past month, amid increasing tensions with the U.S.

The offshore yuan slid as much as 0.35% to 7.1698 per dollar on Wednesday, taking its four-week decline to 1%. That’s the biggest drop among at least 32 major currencies after those in Peru and Argentina. The offshore rate is edging toward its record low of 7.1965 per greenback set in September last year.

There are signs Chinese authorities are content to allow the yuan to fall as the U.S. administration steps up its criticism over Beijing’s initial handling of the coronavirus and intention to impose a national security law on Hong Kong. The People’s Bank of China had this week set its daily yuan reference rate at the weakest level since 2008. The fixing was slightly stronger on Wednesday.

“The PBOC will allow the yuan to continue weakening as U.S. China trade tensions continue rising, as long as it is orderly,” said Qi Gao, a currency strategist at Scotibank.