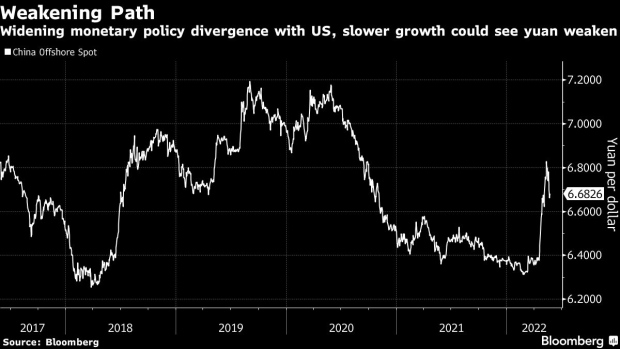 (Bloomberg) -- The yuan’s biggest weekly gain in two years could be fleeting, with some analysts forecasting its slide to the 7 per dollar level.

Option traders are reviving bearish wagers on the Chinese currency as indicated by the three-month dollar-offshore yuan risk reversal, which advanced this week for the first time since mid-May. The cost of shorting the yuan also remains low as offshore yuan tomorrow-next forward points hover around the lowest since January.

Skandinaviska Enskilda Banken AB and Natwest Markets forecast the yuan to resume its decline after easing lockdowns in Shanghai last week spurred the biggest gain since 2020. They expect market focus to shift to the widening monetary policy gap with the US and a deepening slump in the domestic economy.

“The planned easing of Covid restrictions does not directly translate into an immediate resumption of production,” said Eugenia Victorino, head of Asia strategy at Skandinaviska Enskilda Banken. “Lingering restrictions in Shanghai and Beijing will keep the yuan vulnerable,” she said, adding that the yuan could drop to 7 per dollar this quarter.

The 7 per dollar level had served as a key support for the yuan during the US-China trade frictions when policymakers had sought to quell capital outflows. A selloff past that level could unleash a string of measures from the People’s Bank of China akin to those in 2019, including stronger currency fixings and increased bill issuance to make it more expensive to short the yuan in the offshore market.

The yuan has already lost nearly 5% since the end of March to be Asia’s worst-performing currency. A broad package of stimulus measures announced Monday failed to allay concerns over an economic slowdown. UBS Group AG and JPMorgan Chase & Co. joined banks including Standard Chartered Plc, and Goldman Sachs Group Inc in slashing their forecasts for China’s growth, citing the nation’s Covid Zero policy.

Slowing growth is likely to force the People’s Bank of China to maintain its accommodative stance even as the Federal Reserve pushes ahead with aggressive policy tightening to cool inflation. The Fed rate hikes have emboldened the dollar and reduced the attractiveness of Chinese assets for global investors. Foreign funds sold the nation’s debt again in April after two record months of withdrawal.

“While the domestic conditions in China may be showing signs of bottoming out, the dollar is going to be in the driving seat and we’re still going to see yuan weakness,” said Galvin Chia, emerging market foreign exchange strategist at Natwest Markets in Singapore. He expects the currency to hit 7 per dollar over the next two months.

Some traders expect the yuan to rise in the second half of the year on expectations that the cumulative effect of China’s supportive measures will revive domestic growth.

“Economic activities may bounce back, which are supported by the easing monetary and fiscal measures that the authorities have conducted to boost growth,” wrote Banco Bilbao Vizcaya Argentaria SA economists Jinyue Dong and Le Xia in a note. They see the yuan recovering to 6.8 per dollar by year-end after a likely breach of 7.