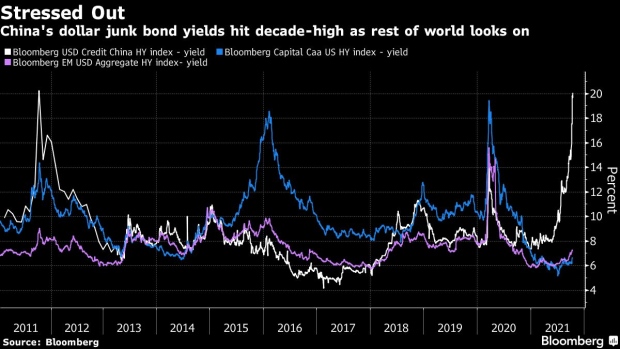 Evergrande’s troubles are leading to more scrutiny for a global dollar bond sale by China that’s planned Tuesday. The Ministry of Finance expects to raise $4 billion from the offering in Hong Kong, a third less than the $6 billion in each of the past two years and the least since 2018, according to Bloomberg-compiled data.

China’s central bank said risks posed to the domestic economy by Evergrande can be contained. The property firm’s trouble “casts a little bit of concern,” People’s Bank of China Governor Yi Gang said at a virtual meeting of the Group of 30 on Sunday.

Tighter restrictions on the property market have curbed construction activity and squeezed financing to the sector, weighing on growth. Home sales by value tumbled 16.9% in September from a year earlier, following a 19.7% drop in August, according to Bloomberg calculations based on National Bureau of Statistics data released Monday. Property stocks on the mainland dropped on the report.

Fears of contagion risks have intensified after a surprise default by Fantasia Holdings Group Co. and a warning from Sinic Holdings Group Co. that its default was imminent. Chinese yields are likely to decline over the next couple of years due to slowing growth and anticipated easing from the People’s Bank, according to Capital Economics’ Oliver Allen.

The Vertex residential project in Cheung Sha Wan still has about 190 units remaining after selling 224 flats. HKET estimates the stake sold by Evergrande, including the 30,000-sq-ft shopping mall and 30 parking spots, has a market value of HK$2.4 billion ($309 million).

While Chinese yields have recently climbed, they are likely to decline over the next couple of years due to slowing growth and anticipated easing from the People’s Bank, according to Capital Economics’ Oliver Allen.

“We forecast that the 10-year government bond yield in China will slip from just over 3% at present to 2.5% by the end of next year,” Allen wrote in a research note Monday.

While Capital Economics doesn’t expect “widespread contagion to China’s financial system from events surrounding Evergrande, we do think its economy will remain very weak, as construction activity slows substantially, and a shift in global consumption patterns weighs on demand for its exports,” Allen wrote.

Moody’s Investors Service cut the corporate family rating of Guangzhou R&F Properties Co. to B3 from B2. It also lowred R&F Properties HK Company’s rating to Caa1 from B3.

The decision on Guangzhou R&F reflected the company’s weak liquidity and high refinancing risks based on debt maturing over the next 6-12 months and its weakened access to offshore funding, Moody’s said.

Earlier, the ratings company reduced the corporate family rating of Kaisa Group Holdings Ltd. to B2 from B1 on expectation that the firm’s liquidity will weaken and as refinancing risks increase. Separately, it cut Greenland Holding Group Co. to Ba2 from Ba1 and placed the corporate family rating of China Aoyuan Group Ltd. on review for downgrade.

For months in the runup to the 2008 financial crisis, banking heavyweights from Federal Reserve Chair Ben Bernanke on down said the turmoil in subprime mortgages would be “contained.”

That phrase is now making a comeback in Beijing as regulators try to reassure markets that the world’s second-largest economy can weather the crisis at China Evergrande Group. Investors are hoping Chinese policy makers prove more adept at ringfencing the damage than their Wall Street counterparts were. Still, signs of a spillover into the economy are hard to ignore.

China’s economy slowed in the third quarter. A residential property slump dragged on last month, as home sales by value tumbled 16.9% in September from a year earlier, according to Bloomberg calculations based on National Bureau of Statistics data released Monday.

The sales slump may fuel a vicious cycle by worsening the cash shortage at developers and forcing them to offer bigger discounts. That in turn could reduce home prices in a country where people keep a large chunk of their wealth in real estate.

People’s Bank of China Governor Yi Gang said authorities can contain risks posed to the Chinese economy and financial system from the Evergrande’s struggles. He was speaking at a virtual meeting of the Group of 30 on Sunday.