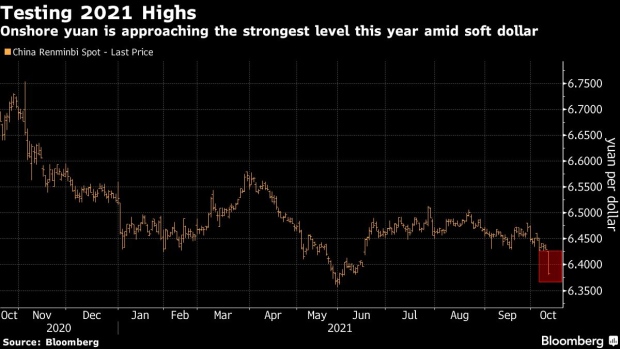 (Bloomberg) -- China’s reference rate for the yuan is in the spotlight, after the tightly-managed currency rallied by the most since January in the previous session.

The fixing, which will be issued at 9:15 a.m. in Beijing, will provide hints on Beijing’s comfort level with the currency after the onshore yuan surged 0.7% on Tuesday to near this year’s peak. The offshore yuan jumped 0.8%.

The advance, which was triggered by a drop in the dollar, is fueling bets that the People’s Bank of China will issue a weaker-than-expected fixing to slow the appreciation. The rate was in line with expectations for most days in the past three months.

“The PBOC may attempt to slow the appreciation of the yuan with a higher dollar-yuan fix,” said Fiona Lim, senior foreign-exchange strategist at Malayan Banking Bhd. in Singapore. However, the fixing “may not stop the dollar-yuan from extending declines, should the greenback continue to weaken broadly.”

The yuan’s advance has come alongside other Asian peers but it’s helped China’s currency break a narrow band that it’s been confined to since late June. The yuan’s strength is a double-edged sword for Beijing: while it facilitates the government’s desire to lure foreign capital onshore, it could make China’s exports less competitive globally and hinder the economic recovery.

The fixing limits the yuan’s moves by 2% on either side.