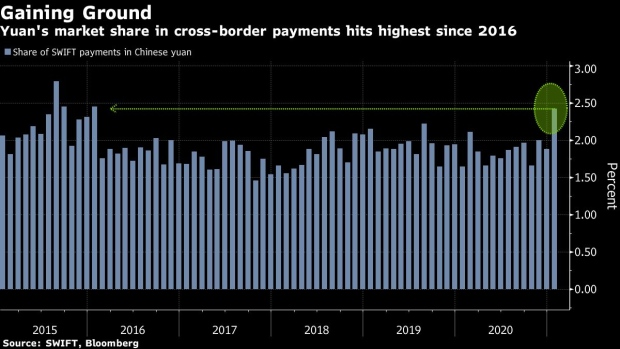 (Bloomberg) -- The Chinese yuan is making deeper inroads as a currency of choice for cross-border payments, with global transactions climbing last month to their highest level since January 2016.

Payment activity in the renminbi, as the currency is also known, jumped from a year earlier, according to data from the Society for Worldwide Interbank Financial Telecommunications, which handles cross-border payment messages for more than 11,000 financial institutions in 200 countries. Despite the increase, the yuan accounts for about 2.4% of the market versus the dollar at 38%.

The greenback maintained its top spot in the ranking, although its share slipped from the previous month. The euro followed with 37%, while the pound remained in third. The yen rounded out the top four.

Swift releases the data in its monthly RMB Tracker on the renminbi’s progress toward becoming an international currency. The Chinese currency was ranked 35th in October 2010, when Swift started tracking currencies. It progressed to the top six in 2014, where it has generally averaged slightly less than a 2% share globally. It has managed to retain the fifth spot in the past three months.

Turnover for the yuan versus the dollar in London, the world’s biggest currency hub, rose to a record $84.5 billion in October, according to data released last month by the Bank of England. That was up 56% from April 2020.

The dollar still remains the top funding currency, with about half of all cross-border loans and international debt securities denominated in the greenback, according to the Bank for International Settlements. About 85% of all foreign-exchange transactions occur against the dollar and it accounts for more than 60% of official foreign-exchange reserves, the financial institution said, adding that about half of international trade is invoiced in the U.S. currency.