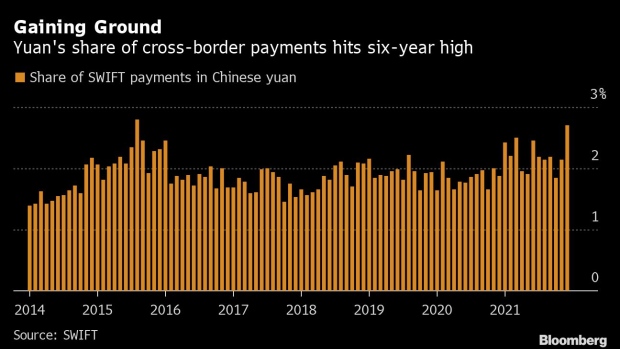 (Bloomberg) -- The Chinese yuan reasserted itself as one of the most-popular currencies for cross-border payments, notching the fourth spot for the first time since August 2015.

Activity in the renminbi, as the currency is also called, rose to its second-highest level ever, according to the Society for Worldwide Interbank Financial Telecommunications. While the Chinese currency made inroads in the rankings, the yuan accounted for about 2.7% of the market versus the dollar at 41%, and has held the top slot since June.

The yuan has seen its popularity as an international currency steadily climb in the last decade. Global funds boosted holdings of Chinese government bonds to a record last month, data show. The renminbi was ranked 35th in October 2010 when Swift, which handles cross-border payment messages for more than 11,000 financial institutions in 200 countries, started tracking.

The euro held its second-place ranking for a seventh month, but its total market share fell to an eight-month low at 37%. The pound followed in third, a spot it’s held since 2011, while the yen rounded out the top five.