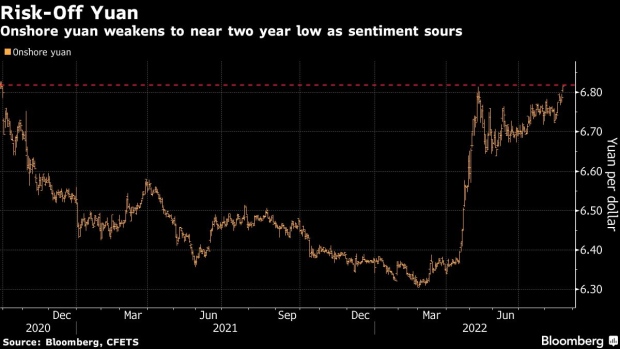 (Bloomberg) -- China’s currency slumped to the weakest level against the dollar in nearly two years as the nation’s widening monetary-policy gap with the US drove outflows from the world’s second-largest economy.

Both the onshore and offshore yuan tumbled to the weakest since September 2020. The decline was initially triggered by an unexpected rate cut by the People’s Bank of China this week. The selloff gathered pace amid the dollar’s latest surge and as the PBOC set the yuan fixing at the lowest level since 2020.

The onshore yuan dropped 0.4% to close Friday at 6.8170 per dollar, while the offshore yuan fell as much as 0.6% to 6.8445 per dollar before paring losses. The Bloomberg Dollar Spot Index advanced for a third day on Friday to reach a one-month high.

“There is ample room for a further pullback in the currency amid the weak economy,” said Alvin Tan, head of Asia FX strategy at RBC Capital Markets in a in a note to clients. He sees the onshore yuan reaching 7 per dollar in the first quarter of 2023, with the PBOC unlikely to oppose further weakening.

Analysts from Standard Chartered Bank Plc and Mizuho Bank Ltd. are forecasting the yuan to weaken as the PBOC’s dovish policy increasingly contrasts with the Federal Reserve that’s hiking rates to tame inflation. Traders bet on the possibility of another large Fed rate hike next month after officials such as St. Louis’s James Bullard continued to call for another 75 basis-point move.

The yuan was also weighed down by growing concerns on the domestic economy as Goldman Sachs Group Inc. and Nomura Holdings Inc. downgraded their growth forecasts further. China’s state media said local governments could sell more than $229 billion of bonds to fund infrastructure investment while banks will likely trim their benchmark loan prime rates Monday for the first time in months to boost the economy reeling from Covid lockdowns.

There are “quite a lot of headwinds for the yuan right now even apart from the easing monetary policy stance,” said Stephen Chiu, chief Asia FX & rates strategist at Bloomberg Intelligence. Covid lockdown uncertainties, property sector doldrums and tensions with Taiwan could weigh on the yuan, he said, adding that even the tailwind from strong exports could abate on slowing global demand.