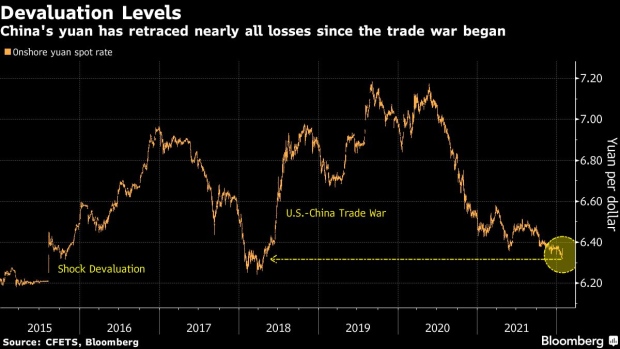 A U.S. one-hundred dollar banknote and a Chinese one-hundred yuan banknote are arranged for a photograph in Hong Kong, China, on Monday, April 15, 2019. China's holdings of Treasury securities rose for a third month as the Asian nation took on more U.S. government debt amid the trade war between the world’s two biggest economies. Photographer: Paul Yeung/Bloomberg , Bloomberg

(Bloomberg) -- After rallying to a four-year high, China’s currency is encountering stiff resistance from a Fed-driven dollar. But yuan bulls are undeterred.

PineBridge Investments says the yuan is on track to test 6.24 per dollar for the first time since it was devalued in August 2015 due to China’s sizable current-account surplus. Mobius Capital Partners LLP doesn’t rule out a move to 6.20 this year, which would imply a gain of about 3% from the current level.

Yuan enthusiasts are betting on a stronger currency amid signs that the central bank is loosening its grip to counter the impact of its monetary easing. The policy divergence with the Federal Reserve, which has signaled it’ll start hiking from March, will put Chinese markets in the limelight as an increasing number of banks turn bullish on the nation’s assets.

“The underlying trend is still in favor of a stronger yuan,” said Anders Faergemann, senior portfolio manager at PineBridge Investments in London. “Fed Chair Powell needed to outline the support for front-loaded rate hikes, yet reality may turn out different” as growth could slow in the second half and the U.S. mid-term election approaches, he said.

To be clear, the yuan’s ascent could be gradual as it runs up against a rising dollar. The greenback is expected to strengthen after Fed Chair Jerome Powell signaled policy makers may ramp up the pace of rate hikes.

China’s currency fell as low as 6.3699 in onshore markets on Thursday after the Fed meeting. It had rallied to 6.3200 the previous day, the strongest since April 2018.

The Chinese authorities wouldn’t favor “an overly strong currency, especially on a basket basis,” said Hao Zhou, emerging market economist at Commerzbank AG. “All told, the battle between markets and policy makers would continue for the time being.”

But so far, the authorities have shown little inclination to rein in the yuan.

Central bank Deputy Governor Liu Guoqiang said last week that while the yuan could deviate from its equilibrium level, market and policy factors will help correct any perceived imbalance. While it did step in last year to slow the gains, the yuan is benefiting from robust inflows and the nation’s record trade surplus.

The authorities set the yuan’s daily fixing rate at the strongest level since 2018 this week. The currency has gained 1.3% against the dollar in the past 12 months.

The yuan’s resilience stands in contrast to the recent spate of negative news emanating from China. The property sector has been hit by a liquidity crisis and a fresh wave of virus cases is weighing on an economy that’s already showing signs of a slowdown.

The central bank lowered its key interest rate for the first time in almost two years this month to counter the weakening growth, and some analysts expect further easing.

Mark Mobius, veteran emerging-markets investor and founder of Mobius Capital Partners, thinks that a level of 6.20 for the yuan this year “wouldn’t be an earth-shaking development,” although a 10%-15% move in either direction may be a bigger cause for concern.

“Right now there’s a debate within the Chinese hierarchy,” Mobius said. “They want stability and control, but they know that have to give up some control if they want to be a global currency.”