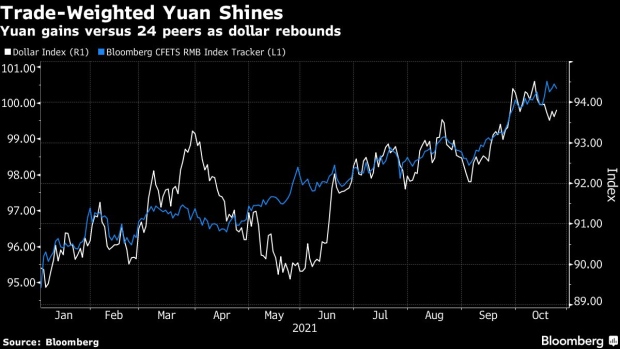 (Bloomberg) -- The yuan has defied a slew of risks to top the rankings of Asian currencies so far this year. There are few signs it’ll be dethroned anytime soon.

Rising exports, surging bond inflows and attractive carry trade returns all argue for further gains in China’s currency. The odds of a reversal are slim as a reduction of U.S. stimulus has been priced in while the fallout from China Evergrande Group’s debt crisis may be contained.

“China’s export boom will continue into the first quarter of 2022, sustaining the nation’s large trade surplus,” said Scotiabank foreign-exchange strategist Qi Gao. The currency could climb to 6.20 per dollar, a level it last reached before it was devalued in 2015, if there’s further progress in U.S.-China talks, he added.

A stronger yuan is likely to spur more inflows and further boost demand for the currency, which would support Beijing’s push to promote its use globally. However, it also risks undermining the competitiveness of China’s exports in the long run.

Here are four charts to illustrate why the yuan is more likely than not to extend its rise:

China’s exports have remained robust even as other indicators point to a moderation in growth for the world’s second-largest economy. Shipments soared to a new monthly record in September on strong demand ahead of year-end holidays. China’s commercial banks bought a net 173.7 billion yuan ($27.2 billion) of the local currency for clients in September, suggesting mainland individuals and corporates prefer to hold the yuan over foreign exchange.

A Bloomberg index tracking the yuan’s move versus 24 peers has advanced to the highest since 2016, reflecting the Chinese currency’s resilience against a stronger dollar. Among emerging Asian currencies, the yuan has strengthened the most against the Thai baht and South Korean won this year, up about 12% and 9%, respectively.

Foreign purchases of Chinese government bonds jumped to an eight-month high in September, and the buying may accelerate when FTSE Russell adds the notes to its flagship World Government Bond Index in October. UBS Group AG estimates that the inclusion will draw an average $3.6 billion of inflows monthly. Another positive is the sizable yield spread between 10-year yuan-denominated debt and similar-maturity U.S. Treasuries, which Maybank Kim Eng Securities Pte expects to remain decent despite some narrowing in the coming months.

The yuan has delivered the best carry-trade returns on a risk-adjusted basis among Asian currencies this year, according to data compiled by Bloomberg. That’s unlikely to change given the yuan’s subdued volatility, with officials predicting that the currency will remain largely steady. The Federal Reserve’s policy normalization won’t disrupt the yuan’s stable momentum and China’s balance of payments position, Wang Chunying, spokesperson for the State Administration of Foreign Exchange, said Oct. 22.