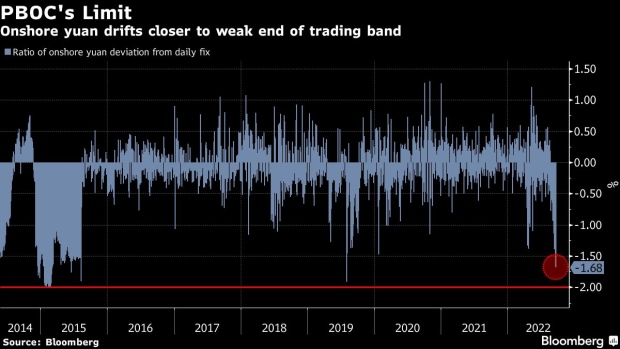 (Bloomberg) -- China’s yuan extended losses to a level closest to the weak end of its allowed trading band since a shock currency devaluation in 2015.

The onshore yuan fell to 7.1280 per dollar, 1.94% weaker than the central bank’s daily reference rate of 6.9920 on Friday. The currency hasn’t been this close to the weak end of the fixing band, which limits the exchange rate’s moves by 2% on either side, since the People’s Bank of China devalued the yuan in 2015.

The latest move constitutes another form of pain threshold for China’s central bank, after authorities allowed the yuan to weaken below the psychological milestone of 7 per dollar earlier this month. With a hawkish Federal Reserve set to sustain the dollar’s global strength, analysts say there’s only so much Beijing could do to shore up its currency at a time of economic difficulties.

“There’s not a lot that can stop the yuan from sinking besides outright intervention,” said Mark Matthews, head of Asia Research at Julius Baer Group Ltd. “There is potential for capital outflows and a hit to market confidence if the yuan falls past 7.2 but I don’t think any country can unilaterally stop what’s happening.”

The PBOC has set the yuan fixing at a stronger-than-expected level for a record 22 days, in addition to other currency support measures from verbal warnings to cutting banks’ foreign-currency reserves. The yuan has lost nearly 11% against the greenback this year.

In the tightly managed domestic yuan market, any orders that price the currency at levels beyond the 2% daily band won’t be accepted by the official trading system.

China is not alone in resisting the ceaseless pressure from the dollar in the region. Japan intervened to prop up the yen for the first time since 1998, while India’s efforts to protect the rupee is running down currency reserves at a rate that’s poised to eclipse the drawdown during turmoil a decade ago.

“I think the best course of action for the PBOC is to continue to gradually raise the fix, said Trang Thuy Le, a strategist at Macquarie Group Ltd., adding that the central bank may compliment stronger fixes with dollar selling to narrow the gap between the spot and the fix. “The alternative of capping the fix would bring PBOC credibility on the line as heavy intervention will be required.”

(Updates with yuan moves in first and second paragraphs.)