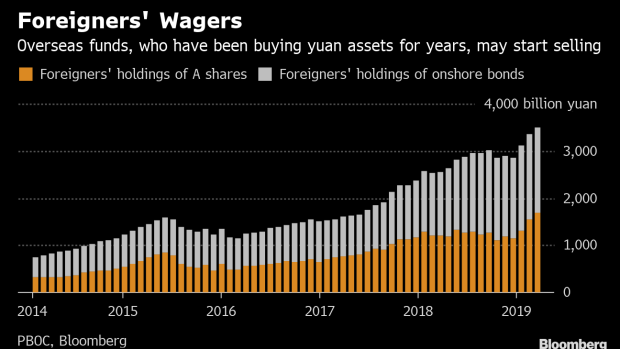 While analysts say the exchange rate is being driven by souring market sentiment as China’s economy slows and the U.S. ramps up tariffs, the slide towards 7 against the dollar comes during crunch trade negotiations.

The offshore yuan has fallen almost 3% this month, making it the worst performing currency in Asia, and the onshore yuan broke the 6.9 level on Friday for the first time this year.

"This will give ammunition to hawks in Washington," said Hui Feng, a senior research fellow at the Griffith Asia Institute and co-author of “The Rise of the People’s Bank of China.”

That’s probably one of the reasons the central bank is now trying to push back -- at least verbally. China has ample policy tools to cope with fluctuations in the foreign-exchange market, State Administration of Foreign Exchange head Pan Gongsheng said in an interview with Financial News published on the PBOC website Sunday.

While tight capital controls and the world’s biggest holding of foreign exchange reserves offer a crucial buffer, the yuan’s weakness will also be a test for President Xi Jinping, who as recently as last month pledged against currency depreciation that harms other nations.

A weaker currency risks pressuring households and companies to get money out of the country and would force the government to draw on its more than $3 trillion reserves to defend it.

A yuan sell-off would also rattle investors, as seen in the aftermath of a shock devaluation in 2015. That year, the yuan’s slide triggered panic in the stock market and stoked concerns of a hard landing.

The worry is that a yuan slump could make consumers less willing to spend and corporates lose the motivation to make investments, according to Citigroup Inc. strategists Lu Sun and Gaurav Garg.

It could also trigger trading partners to allow their currencies to weaken in response.

Foreign investors, who have been boosting holdings of onshore stocks and bonds for years, may accelerate their selling if the yuan sinks past 7, according to Citi’s Sun and Garg. Overseas funds may also prefer global index compilers to delay adding Chinese assets to their gauges, they said. That could postpone capital inflows just as China is expected to see a current account deficit and undermine a major support for the yuan.

"It really depends on the pace and the extent to which it goes," Viraj Patel, foreign exchange and global macro strategist at Arkera told Bloomberg Television. "If it is a sharp move that takes markets by surprise then that will have greater ramifications for global markets."

For China’s manufacturers and exporters, a weaker yuan would boost their competitiveness. A Bloomberg replica of the CFETS RMB Index, which tracks the yuan against 24 trading partners’ currencies, fell for a 13th straight day on Friday -- the longest run since the data were available in January 2015.

"I am sure that a weakening of the yuan will be disliked by Trump, and taken by him as a political act," he said.

To contact the editors responsible for this story: Malcolm Scott at mscott23@bloomberg.net, Sofia Horta e Costa