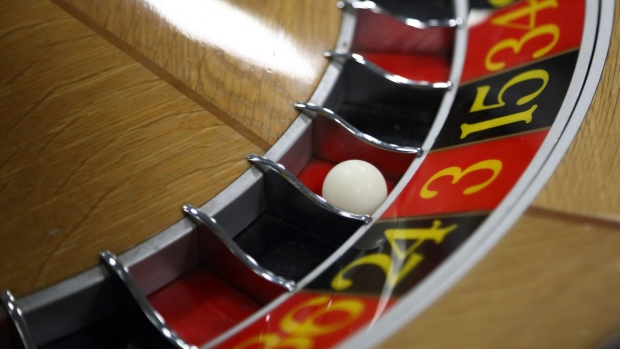 A ball sits on a spinning roulette wheel at the Japan Casino School in Tokyo, Japan, on Monday, June 16, 2014. At Japan Casino School, anticipation for the passage of the bill to legalize casinos has helped to enroll about 60 students in April, the second highest since its start in 2004, said principal Masayoshi Oiwane. Photographer: Bloomberg/Bloomberg , Photographer: Bloomberg/Bloomberg

(Bloomberg) -- Affinity Gaming, a casino operator owned by Z Capital, plans to raise $150 million for a special purpose acquisition company, according to people with knowledge of the matter.

The SPAC, Las Vegas-based Gaming & Hospitality Acquisition Corp., intends to combine with Affinity as well as an entity that it hasn’t yet identified, a presentation to potential investors shows. That differs from most SPACs, which typically raise money to buy an undetermined target.

The target firm ideally will be valued at $500 million or more, including debt, to form a company with an enterprise value of more than $1 billion.

The new blank-check firm has filed confidential paperwork with the Securities and Exchange Commission. The deal could be upsized within a traditional 20% range, and by an additional 15% if underwriters opt to exercise a so-called greenshoe.

Z Capital, led by founder and Chief Executive Officer Jim Zenni, has owned Affinity since 2017. The casino operator, with locations in Iowa, Missouri and Nevada, expects to generate earnings before interest, taxes, depreciation and amortization of about $80 million in 2020, valuing it at about $700 million including debt, according to one of the people.

Affinity’s potential target may include other regional gambling companies including those that make technology, equipment or operate digital platforms, so-called orphan properties being sold by casino operators, or businesses that are focused on distributed gaming. The latter, also known as slot routes, is legal in states including Illinois and involves the fitting of slot machines at gathering places such as truck stops, bars and restaurants.