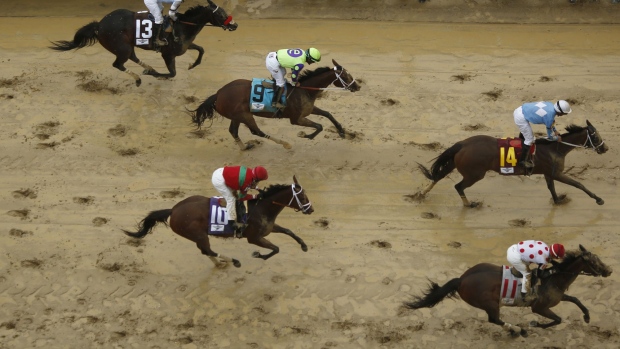 Thoroughbred racehorses cross the finish line during race on the eve of the Kentucky Derby at Churchill Downs in Louisville, Kentucky, U.S., on Friday, May 5, 2017. The 143rd running of the Kentucky Derby will feature a field of twenty horses with the winner receiving a gold trophy plus an estimated $1.24 million payday. , Bloomberg

(Bloomberg) -- Z Capital Group is exploring strategic alternatives including a sale of Sports Information Group LLC, the owner of horse-racing data and media platform Daily Racing Form, according to people with knowledge of the matter and a document sent to prospective buyers reviewed by Bloomberg.

Potential buyers include Penn National Gaming Inc., DraftKings Inc. and Flutter Entertainment Plc, said one of the people, who requested anonymity because the information is private. The company could fetch more than $350 million, the person added.

Sports Information Group is working with Macquarie Capital, the advisory arm of Macquarie Group Ltd., to solicit interest from potential suitors, the document shows. The platform receives more than 15 million annual page views and has over 20,000 active betting customers.

Representatives for Z Capital and Macquarie declined to comment.

Z Capital acquired New York-based Sports Information Group in 2017 for less than $100 million from lenders after a restructuring process.

Horse-racing in the U.S. represents a smaller piece of the overall sports betting market compared to countries like the U.K. and Australia, presenting an ongoing growth opportunity for companies like Sports Information Group, according to the document sent to prospective buyers.

Led by Chief Executive Officer Itay Fisher, a former William Hill Plc executive, the company is positioned to diversify into other sports, said one of the people with knowledge of the matter.

No plans are final and Z Capital could decide to keep the company.

In the U.S., states including New York and New Jersey have legalized sports betting. The research company Eilers & Krejcik Gaming estimates that sports betting could become a $17 billion market in the U.S. if it’s fully legalized in all 50 states.